Apparently the Harry Reid hirelings who egged the Tea Party Express bus at Searchlight, Nevada last Saturday were members of the International Brotherhood of Electrical Workers Local 357 (CLICK THE LINK FOR MORE). 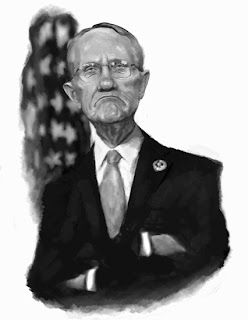 And perhaps I also owe an apology to SEIU because I bet a friend that the thugs were from the Service Employees International Union – Union-supplied heavies who traditionally act in this role on behalf of barack hussein obama and other members of the Democratic Party.

In the past we’ve seen ACORN or SEIU hirelings bussed to events, paid for their work at disruption and usually offered a sack lunch. This time nobody saw their bus, but there were only about a dozen of them protesting, throwing eggs, threatening violence (see video available on link above). It doesn’t mean that they weren’t bussed in on a charter – just that nobody there saw it.

Searchlight Nevada Police:  Ok, the only citizen of any means in the City of Searchlight, which is a collection of tumbledown mobile homes, trailers and shacks for the most part, is Senator Harry Reid. How much say would the Senator from the Great State of Nevada have in hiring the chief? (rhetorical question you can answer yourself) And you expect THEM to investigate an assault by IBEW THUGS? 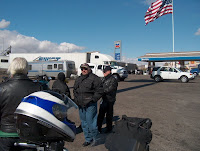 This photo of people standing at the center of Searchlight, Nevada will note that the city offers a gas station, a McDonald’s restaurant and an intersection. That’s more or less it. Harry has a house there, it’s true. It’s his official residence. Any policeman who crosses Harry Reid in Harry’s jerkwater town would find himself on the rolls of the unemployed – which would include the bulk of the residents of Searchlight. There is no way that they would conduct a fair and impartial investigation into IBEW thugs doing anything at the behest of their master in that city.

I feel sorry for the officers, by the way. I’m sure they’re good and honest public servants placed into an impossible situation.