SAA May Get You (one day) 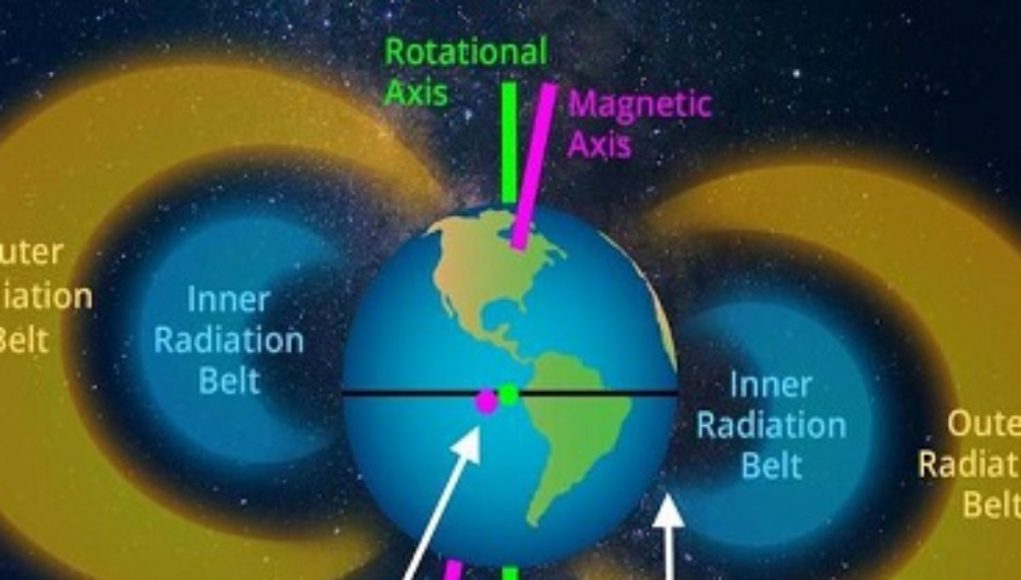 We’re not Doomed (yet)

A small but evolving dent in Earth’s magnetic field can cause big headaches for satellites.

Earth’s magnetic field acts like a protective shield around the planet, repelling and trapping charged particles from the Sun. But over South America and the southern Atlantic Ocean, an unusually weak spot in the field — called the South Atlantic Anomaly, or SAA — allows these particles to dip closer to the surface than normal. Particle radiation in this region can knock out onboard computers and interfere with the data collection of satellites that pass through it — a key reason why NASA scientists want to track and study the anomaly.

The South Atlantic Anomaly is also of interest to NASA’s Earth scientists who monitor the changes in magnetic field strength there, both for how such changes affect Earth’s atmosphere and as an indicator of what’s happening to Earth’s magnetic fields, deep inside the globe.

Currently, the SAA creates no visible impacts on daily life on the surface. However, recent observations and forecasts show that the region is expanding westward and continuing to weaken in intensity. It is also splitting — recent data shows the anomaly’s valley, or region of minimum field strength, has split into two lobes, creating additional challenges for satellite missions.

A host of NASA scientists in geomagnetic, geophysics, and heliophysics research groups observe and model the SAA, to monitor and predict future changes — and help prepare for future challenges to satellites and humans in space.

It’s what’s inside that counts

The South Atlantic Anomaly arises from two features of Earth’s core: The tilt of its magnetic axis, and the flow of molten metals within its outer core. 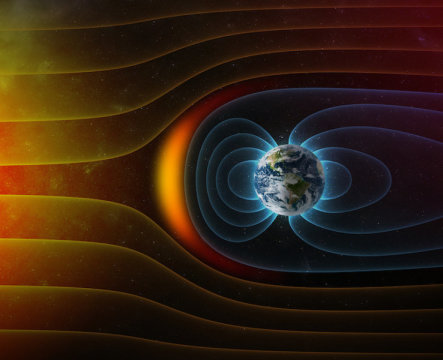 Earth is a bit like a bar magnet, with north and south poles that represent opposing magnetic polarities and invisible magnetic field lines encircling the planet between them. But unlike a bar magnet, the core magnetic field is not perfectly aligned through the globe, nor is it perfectly stable. That’s because the field originates from Earth’s outer core: molten, iron-rich and in vigorous motion 1800 miles below the surface. These churning metals act like a massive generator, called the geodynamo, creating electric currents that produce the magnetic field.

As the core motion changes over time, due to complex geodynamic conditions within the core and at the boundary with the solid mantle up above, the magnetic field fluctuates in space and time too. These dynamical processes in the core ripple outward to the magnetic field surrounding the planet, generating the SAA and other features in the near-Earth environment — including the tilt and drift of the magnetic poles, which are moving over time. These evolutions in the field, which happen on a similar time scale to the convection of metals in the outer core, provide scientists with new clues to help them unravel the core dynamics that drive the geodynamo.

“The magnetic field is actually a superposition of fields from many current sources,” said Terry Sabaka, a geophysicist at NASA’s Goddard Space Flight Center in Greenbelt, Maryland. Regions outside of the solid Earth also contribute to the observed magnetic field. However, he said, the bulk of the field comes from the core.

The forces in the core and the tilt of the magnetic axis together produce the anomaly, the area of weaker magnetism — allowing charged particles trapped in Earth’s magnetic field to dip closer to the surface.

The Sun expels a constant outflow of particles and magnetic fields known as the solar wind and vast clouds of hot plasma and radiation called coronal mass ejections. When this solar material streams across space and strikes Earth’s magnetosphere, the space occupied by Earth’s magnetic field, it can become trapped and held in two donut-shaped belts around the planet called the Van Allen Belts. The belts restrain the particles to travel along Earth’s magnetic field lines, continually bouncing back and forth from pole to pole. The innermost belt begins about 400 miles from the surface of Earth, which keeps its particle radiation a healthy distance from Earth and its orbiting satellites.

However, when a particularly strong storm of particles from the Sun reaches Earth, the Van Allen belts can become highly energized and the magnetic field can be deformed, allowing the charged particles to penetrate the atmosphere.

“The observed SAA can be also interpreted as a consequence of weakening dominance of the dipole field in the region,” said Weijia Kuang, a geophysicist and mathematician in Goddard’s Geodesy and Geophysics Laboratory. “More specifically, a localized field with reversed polarity grows strongly in the SAA region, thus making the field intensity very weak, weaker than that of the surrounding regions.”

A pothole in space 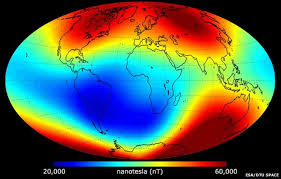 Although the South Atlantic Anomaly arises from processes inside Earth, it has effects that reach far beyond Earth’s surface. The region can be hazardous for low-Earth orbit satellites that travel through it. If a satellite is hit by a high-energy proton, it can short-circuit and cause an event called single event upset or SEU. This can cause the satellite’s function to glitch temporarily or can cause permanent damage if a key component is hit. In order to avoid losing instruments or an entire satellite, operators commonly shut down non-essential components as they pass through the SAA. Indeed, NASA’s Ionospheric Connection Explorer regularly travels through the region and so the mission keeps constant tabs on the SAA’s position.

The International Space Station, which is in low-Earth orbit, also passes through the SAA. It is well protected, and astronauts are safe from harm while inside. However, the ISS has other passengers affected by the higher radiation levels: Instruments like the Global Ecosystem Dynamics Investigation mission, or GEDI, collect data from various positions on the outside of the ISS. The SAA causes “blips” on GEDI’s detectors and resets the instrument’s power boards about once a month, said Bryan Blair, the mission’s deputy principal investigator and instrument scientist, and a lidar instrument scientist at Goddard.

“These events cause no harm to GEDI,” Blair said. “The detector blips are rare compared to the number of laser shots — about one blip in a million shots — and the reset line event causes a couple of hours of lost data, but it only happens every month or so.”

In addition to measuring the SAA’s magnetic field strength, NASA scientists have also studied the particle radiation in the region with the Solar, Anomalous, and Magnetospheric Particle Explorer, or SAMPEX — the first of NASA’s Small Explorer missions, launched in 1992 and providing observations until 2012. One study, led by NASA heliophysicist Ashley Greeley as part of her doctoral thesis, used two decades of data from SAMPEX to show that the SAA is slowly but steadily drifting in a northwesterly direction. The results helped confirm models created from geomagnetic measurements and showed how the SAA’s location changes as the geomagnetic field evolves.

“These particles are intimately associated with the magnetic field, which guides their motions,” said Shri Kanekal, a researcher in the Heliospheric Physics Laboratory at NASA Goddard. “Therefore, any knowledge of particles gives you information on the geomagnetic field as well.”