Ring Around the Moon? 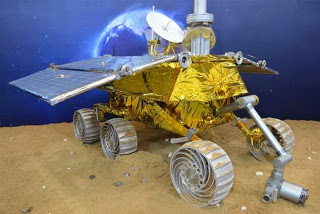 Facebook
Twitter
Pinterest
WhatsApp
Jade Rabbit
The Chinese are sending a lander to the Moon (launch a couple days ago). A Chinese Long March rocket is scheduled to lift off from the Xichang Satellite Launch Base in Sichuan Province carrying a small robotic rover named Jade Rabbit, that will touch down on to the lunar surface in about two weeks’ time. China plans to put a man on the moon by the end of the next decade and then establish a permanent lunar base.
The Chinese might pull it off. They can fund the program with the interest that they earn by loaning money to the debt ridden United States, which has ceded its former primacy in space to other nations.
Ring Around the Moon

(Daily Telegraph – UK) A Japanese construction firm is proposing to solve the well-documented energy problems facing Japan – and ultimately the entire planet – by turning the moon into a colossal solar power plant.

Tokyo-based Shimizu Corp. wants to lay a belt of solar panels 250 miles wide around the equator of our orbiting neighbour and then relay the constant supply of energy to “receiving stations” on Earth by way of lasers or microwave transmission.

These ideas are usually interesting and the research almost always ends up offering some sort of derivative benefit — somewhere. But it’s unlikely that anyone will fund the project unless there is a way to pay for it (beyond just replacing Japanese nuclear reactors).
US Lunar Studies
NASA continues to study the Moon primarily with lower cost satellites (such as GRAIL) and other experiments, some of which “ride” on satellites launched by nations such as India.  NASA’s Moon Mineralogy Mapper (M3) instrument aboard the Indian Space Research Organization’s Chandrayaan-1 spacecraft, remotely detected magmatic water, or water that originates from deep within the moon’s interior, on the surface of the moon. So the US isn’t out of the game entirely.
Then again, if one of NASA’s main missions during the Obama Years wasn’t to make Muslims feel good about themselves, more might be able to get done.