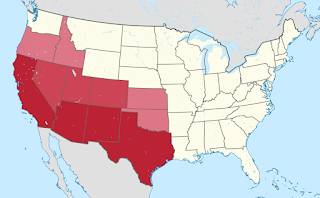 Facebook
Twitter
Pinterest
WhatsApp
Have you ever wondered WHY Mexicans who are protesting Donald Trump are waving the Mexican flag as part of that protest? It doesn’t make much sense until you understand their mindsets. Diogenes’ Middle Finger had a good blog post on the subject. Let’s begin there and I’ll elaborate as best I can. 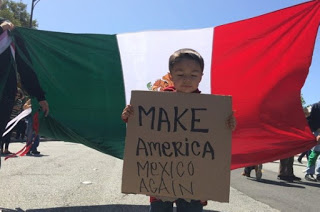 It starts with a twisted bit of thinking and the fictional nation of Aztlan, which Mexicans or Chicanos wish to reconquer.  More on Wikipedia. Part of this angst comes from the war between the US and Mexico that took place between April 25, 1846 – February 3, 1848. Some in the radical Chicano movement feel that the Treaty of Guadalupe Hidalgo was unjustly arrived at by Mexico. They would like to annex most Western US States to form a new nation, populated by Hispanics, free of white people. (It’s only racist if you’re white and say something like that)
That’s it. That’s the movement and that’s why they wave Mexican flags.
Their goal is to reconquer the American Western States, expel anyone who isn’t Hispanic and install their own (communist) government.
It’s something that I haven’t heard on Fox News or any of the mainstream media outlets. Do the research, you’ll see what I mean.

And that brings us to Donald Trump, the least likely American leader to cede US territory to a few hundred Chicano racists. It’s not surprising that his talk of deporting the foot soldiers that these grievance peddlers want to mobilize must keep them awake at night. They hope for a guerrilla movement where Mexico rises again…except it was Spain, not Mexico, that explored some of the western portion of North America. And that the thing that makes Mexican food good was the French occupation of Mexico and their distinctive love of sauces.

Nobody celebrates Cinco de Mayo in Mexico. But you can bet your last pound of carnitas that the radical Chicano movement will be swilling cerveza and gulping pulque by the gallon (peasant liquor). They don’t have much sense of themselves, but they’d like to retake California, Arizona, New Mexico and Texas.