Hillary (What does it Matter?) Clinton (The Mini-Series)

Under other circumstances, I’d put this down in the Hollywood Report (below) where 80 year old British actress Joan Collins is squabbling with 79 year old Shirley Jones. But Hillary is big political news and her long anticipated mini-series is expected to launch her campaign for the US Presidency.


Hillary, who’s just about as old as Joan Collins, never participated in sexual antics with her husband Bill — not ever. The one big question I have is whether the now out-of-work Anthony Weiner will play young Bill Clinton in the series?
Where was I? Oh, yeah. The mini-series, being produced by NBC. The Republican National Committee responded to the production with a sharply worded letter, which NBC will ignore:

(RNC response in part) “Out of a sense of fairness and decency and in the interest of the political process and your company’s reputation, I call on you to cancel this political ad masquerading as an unbiased production. If you have not agreed to pull this programming prior to the start of the RNC’s Summer Meeting on August 14, I will seek a binding vote of the RNC stating that the committee will neither partner with you in 2016 primary debates nor sanction primary debates which you sponsor.

Every mini-series needs comic relief and when you consider the Vince Foster “suicide”, White Water, all of Bill’s girlfriends, Bill’s small army of bastard children, getting beaten by Barack Obama in 2008, etc. she’s going to need a few laughs. Those could be provided by Anthony Weiner – Playing Bill Clinton.
Would the Russians respect Bill Clinton’s cast-off any more than they respect Barack, who is apparently not Communist enough? (or just a big wimp) Just asking.
Hollywood Report (too much information)
British actress, Joan Collins, 80, is angry about a portion of “Shirley Jones: A Memoir,” in which Jones writes that she, her then-husband Jack Cassidy, Joan Collins and Collins’ second husband, Tony Newley were swingers. Jones, 79, has written a tell-all book but Collins apparently feels as if she told too much and sent Jones a cease and desist letter.
The concept of sexual escapades in Hollywood is so shocking and burns the conscience so deeply that I can’t see why Shirley Jones would include it in her book, which I haven’t read and am unlikely to read — because I don’t really care who boinked whom. But it is salacious in a historical context, and therefore has a part of this review of the news.


Normally you don’t find a fashion section in Review of the News, but I think that it’s time that we include one since there doesn’t seem to be much choice in fashion options anymore.


(The Daily Mail) British newspapers are explaining why non-Muslims who work in Muslim neighborhoods in London are being pushed to wear hijab whether or not they’re Muslims. When I was a young man, the British made news with the invention of the mini-skirt. Now it seems to be going the other way.

Women who do not wear headscarves are being threatened with violence and even death by Islamic extremists intent on imposing sharia law on parts of Britain, it was claimed today. (The Daily Mail opcit)

Since this is coming from the “religion of peace”, I’m sure that any murders of offending women will be carried out peacefully. In Saudi Arabia even female babies must wear burkas. I wonder how long it will be before all British female children are wearing baby burkas?
Sheikh Abdullah Daoud, a senior Saudi cleric issued a religious edict, or fatwa, ordering all female babies to wear the burka. Sharia Law typically reserves the burka for post-pubescent girls. The reason for this fatwa? To discourage molestation from men. (link) 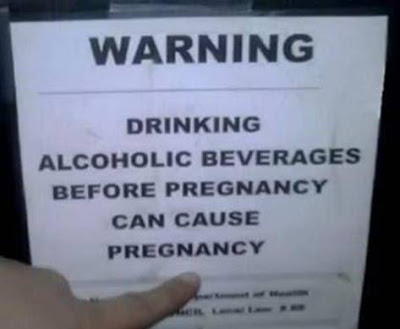 I realize that most of you know this, but you will still fall victim. 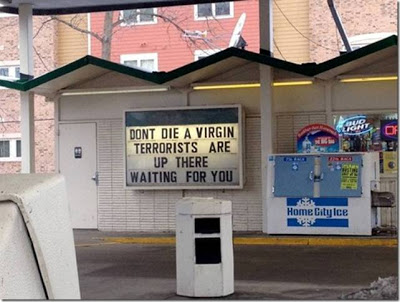 Drive-through dairies always have what you need.
In this case, sage advice. 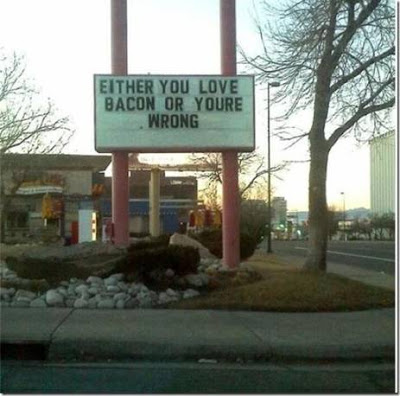 If you own a hotel/motel, you can’t post a sign that says that you
don’t want Muslims staying there. However there are other ways
to get the point across.