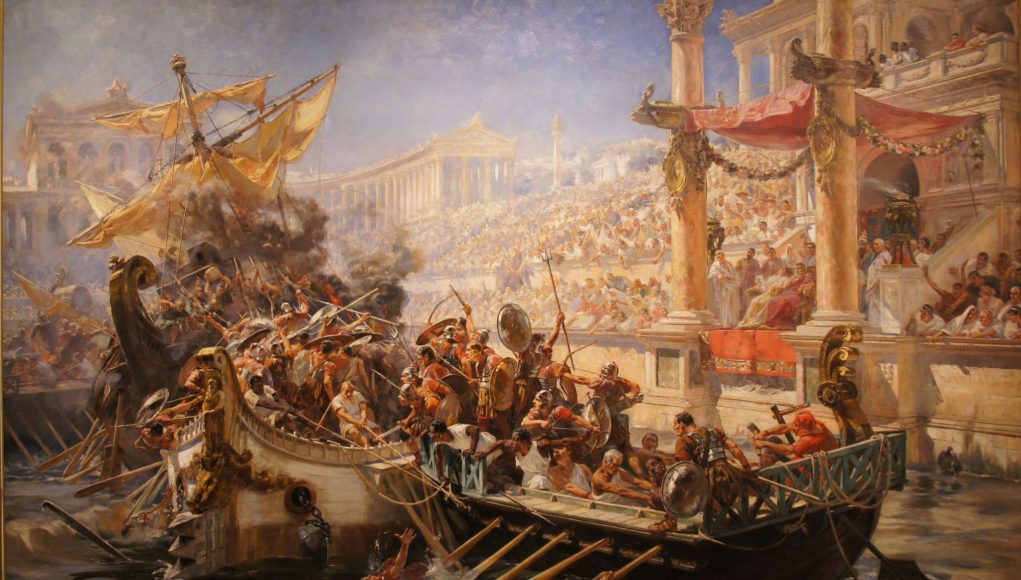 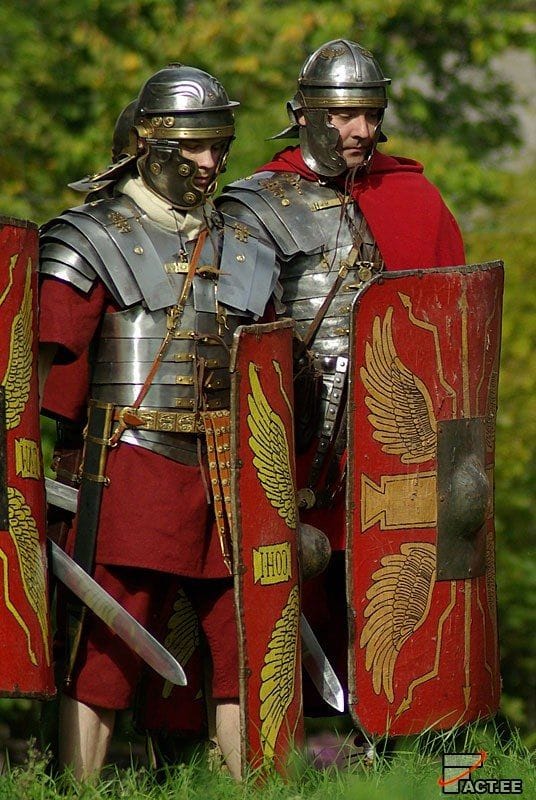 The Naumachia, i.e. reenactments of naval battles in the arena or on artificial lakes, probably went back to Gaius Julius Caesar, 46 BC, who celebrated his military successes by presenting a battle on an artificial lake in which biremen, triremen and quadriremen with four thousand oarsmen and two thousand deckhands in battle dress took part, representing the fleets of Tyros and Egypt. The fighters involved in the Naumachia were called Naumachiarii. Like the gladiators they were mostly slaves, prisoners of war or condemned to death. Through a good performance they could fight for their freedom.

Augustus had a new lake built on the left side of the Tiber after the one built by Caesar had to be filled in again because of the danger of epidemics. In 2 BC, he organized a naval battle there, on the occasion of the inauguration of the temple of Mars Ultor. The famous naval battle of Salamis in 480 B.C., in which the Greeks defeated the Persians, was re-enacted. The lake, which measured about 540 by 350 meters, had a small island in the middle, modeled on the bay of Salamis. Thirty birems and trirems were used, along with numerous smaller ships. In addition to the oarsmen, whose number is not mentioned in the sources, there were three thousand soldiers on board the ships. 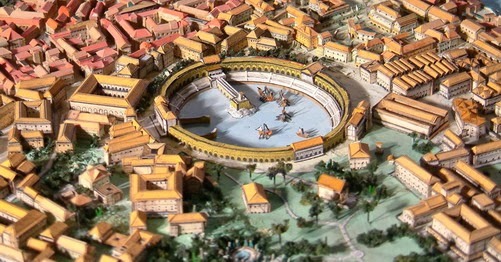 The largest known re-enacted naval battle was organized by Emperor Claudius in 52 AD. On trirems and quadrirems 19,000 oarsmen and soldiers fought, divided between a “Rhodian” and a “Sicilian” fleet. Before the battle, the participants, prisoners of war and slaves condemned to death, are said to have greeted Claudius with words often associated with gladiators: Ave Caesar, morituri te salutant– Hail, Caesar, the doomed ones greet you. (This greeting is generally associated with gladiators. However, there is no evidence that a gladiatorial fight ever took place in which the gladiators addressed the Roman emperor in this way.) 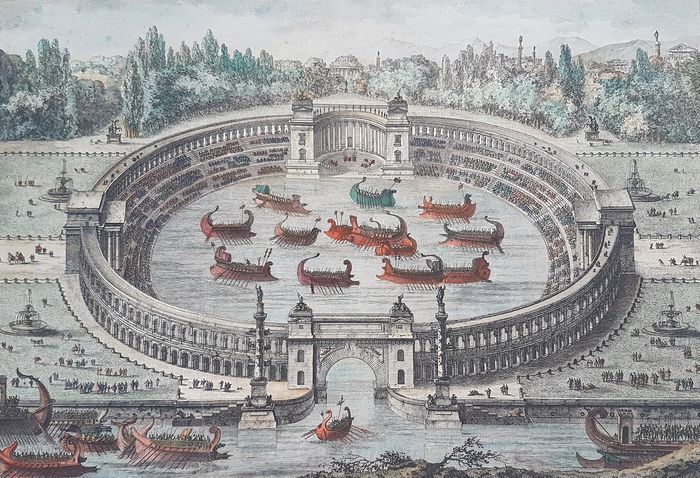 In an effort to demonstrate their absolute claim to power, the emperors wanted to make an even greater impression on the audience with naval battles integrated into the gladiator games. Caligula was a kind of pioneer in this respect, even if the basin he excavated brought him nothing but scorn, since a single ship could fit into it. Nero went a step further and had a theatre filled with water, in which a naval battle between Persians and Athenians was re-enacted, although Nero was also releasing animals like Crocodiles and other water animals (“sea monsters”) into the water. When the battle was over, the water was drained and before the ground was even dry, gladiators were competing against each other.

Emperor Titus was the third emperor to flood a Roman arena and stage a naval battle integrated into the ongoing program of gladiator fights, all this on the occasion of the opening of the Colosseum. The spectacle in the arena was based on the battle between the Corky-ites and the Corinthians at the beginning of the Peloponnesian War. At the same time he organized a naval battle on the artificial lake that Augustus had had built on the banks of the Tiber. 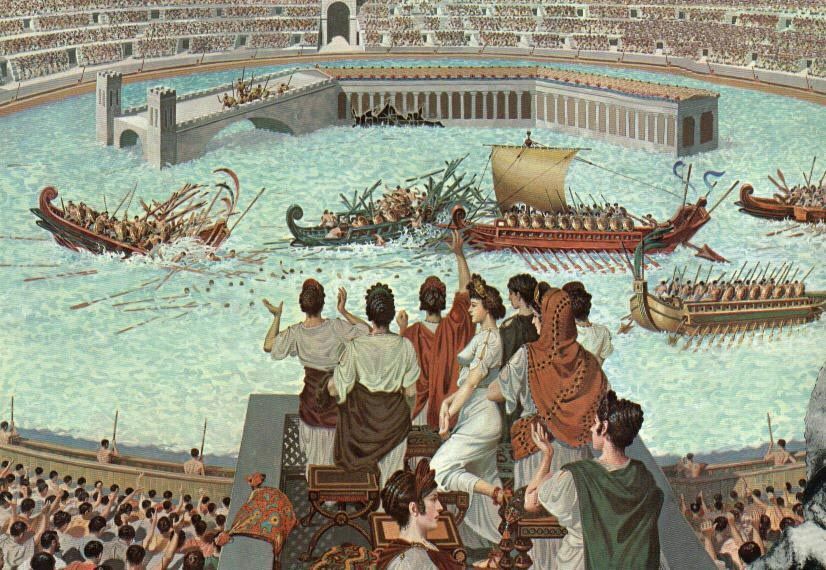 Cassius Dio writes about this: Numerous men fought as lone fighters, and quite a few groups fought with each other in land and sea battles. For Titus would suddenly fill that very theatre with water and bring in horses, bulls and other tame animals trained to behave in the water just as they would on the water. In addition there were also people on ships. They performed a naval battle there in the role of Corkieans and Corinthians, while others outside the city staged a similar spectacle in the Grove of Gaius and Lucius, in a place that Augustus had had built for this very purpose. There too, on the first day, a gladiatorial fight and an animal hunt took place, with the water in front of the pictures being covered with a wooden floor and wooden stands erected all around. The second day was followed by a chariot race and the third by a naval battle, which was followed by an infantry fight. The “Athenians” defeated the Syracuse – the name under which both parties fought at sea -, landed on the island and conquered a wall built around the monument. (from: Cassius Dio, The Roman History, Epitomy of the Book 66,25,2-4)

Modern historians are divided on whether naval battles actually took place in the Colosseum, despite there being ancient accounts of them. This 1721 engraving imagines one organized by Emperor Domitian in the Colosseum. Archaeologists calculated how long it would take to flood the area and came to the conclusion that it would take up to three and a half hours. so it was quite possible, although it is likely that there would only have been a small amount of water to hold an event.

Domitian made the Colosseum unsuitable for naval battles, although he had a naval battle held there before, probably to refute the claim that he could not keep up with his predecessor. Domitian had the cavity under the Colosseum converted into a hypogeum, a cell and cage block for gladiators and wild animals, spread over two floors and separated by walls and corridors. Therefore, the theatre could no longer be placed under water. Domitian, however, organized further naval battles, but at a site near the Tiber, where he had a basin dug out and surrounded by rows of seats.

The Naumaquia of 1755. Between the 12th and 13th of July 1755 and to commemorate the third centenary of the canonization of Saint Vicente Ferrer, a Naumaquia took place in the Turia river.

The last staged naval battle was probably organized by Emperor Philip Arabs in 247 AD. Nothing is known about the effort of this Naumachia, so it remains open how great the enthusiasm of the audience was.

But this type of event did not stop there. Even in later centuries, there were still some Naumachie events to honor great deeds or other festivities. In the baroque period the Naumachia were revived for the amusement of courtly society. For example, naval battles were fought on the (now drained) Brandenburg Lake in Bayreuth, in which numerous actors were killed.