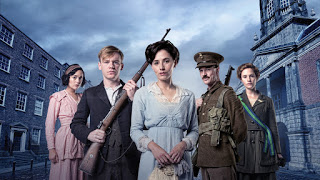 Rebellion  is a five-part original Netflix series set in Ireland in 1916 shortly before and after the “Easter Rising” wherein the Irish rebelled against the British government. The rebellion ultimately succeeded, but that’s well into the future for the breadth and scope of the series. I’d like to see a second season, but there is no word of that happening as of yet.
The mini-series focuses on three women – and a family (Mahon) who were involved in the rebellion. Despite some reviews of the series that were negative, I enjoyed it and recommend it.  If you’re going to watch it, I suggest that you see it through all five episodes.