Putin and the Gay Adoption Issue 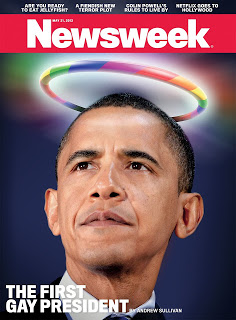 You should never say never.
I never thought that America would stack up morally behind Russia, but that’s the way it is and there isn’t anything that I can do behind it.
Lone Star Parson and The Last Tradition both beat me to the punch but I’m throwing my cracker in the soup anyway because it’s my Sunday Sermonette. No I’m not a holy man. Just an American with an opinion.
We all know that President Barack Obama had a number of homosexual encounters before he married Michelle, who by all accounts is female. Therefore it’s no surprise which side of the gay marriage issue that he’s landed on. He’s comfortable with sodomy.
Russian strongman and political oligarch, Vladimir Putin, a world class woman chaser, is blatantly heterosexual and feels that there is something wrong with homosexuals who wish to adopt children. Unlike many Americans who would seem to have no shame – and feel that it’s even acceptable for transgender people – (used to be called an abomination) to adopt babies.

(News) …Two years after adopting the boy, the couple split and started a legal dispute over parental rights. Such a relationship is “rather questionable from the point of view of morality” and the child got drawn into this row, observed Russian Foreign Ministry’s Commissioner for Human Rights Konstantin Dolgov. Now the Ministry is set to look into possible “psychological damage” inflicted on the boy.

Some Russians however say that banning adoptions by same-sex couples is a half measure. The head of the ‘All-Russian Parents’ Assembly’ movement, Nadezhda Khramova, says a total ban of foreign adoptions would be a smarter move, as “it is technically difficult to verify the adoptive parents’ sexual orientation and their legal status can be a marriage of convenience”.

You’d think that a man like Obama, reared by communists and a utopian socialist himself, would find some common cause with a man like Vladimir Putin. However, as Putin would tell you, Russia is no longer communist. It’s an oligarchy and a multi-party system, and while I’m not extolling the virtues of Putin or of Russia, I have to say that they’ve come down on the correct side of this issue.

Obama wouldn’t be caught dead hunting or fishing. Putin likes to do both. Should you happen to see Putin in public, he’s seldom ringed with steel the way that Obama is — and there are usually attractive women hanging around him. Obama attracts Rahm Emanuel and Valerie Jarrett.

So as much as I spent my life on the side opposite of the Russians, I have to say that they have the moral high ground on this topic.