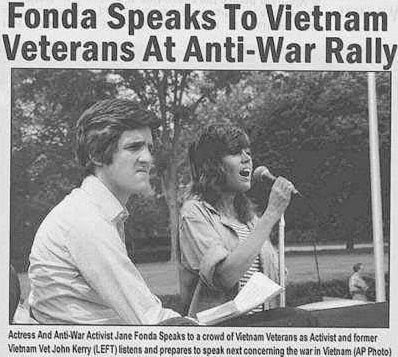 People speak of war, but few carry the burden. I try not to watch the news because it ticks me off. America’s current Secretary of State nauseates me even more than its past SECSTATE did, and that’s quite a statement. He’s in the photo (right) with Hanoi Jane Fonda, who should have been executed for treason – but is celebrated by progressives for — I’m not sure what.
The rift between politician and soldier is nothing new. Every civilized culture has seen what happens when the old and spineless commit the young and brave to the battlefield. Sometimes it has good results. Sometimes it has bad ones. Regardless, it’s the reality of how human beings conduct warfare.
The man in the legislature will never make the same sacrifices as the man on the ground. A society who doesn’t realize this is doomed. When we forget the cost of war and blindly follow our leaders who wish to commit troops, disaster will result. We must have a dedicated political body, citizenry, and military in order to conduct a successful campaign.
Most of you may not know that I was completely opposed to the War in Iraq. Unlike most of you, I knew that we planned to invade 10 months before we did…before the announcement of ‘weapons of mass destruction’ that weren’t wouldn’t be made for 6 more months. The thought ran like this — ‘the Iraqis surely wouldn’t have destroyed them all’. Except that they did and credible sources on the ground verified that.  So, I wouldn’t call my self pro-Republican in the Iraq War department. When I and those like me informed the Bush Administration that it would require 250,000 US troops in place for 10 years to normalize Iraq, they responded this way, “We don’t have 250,000 troops to send and 10 years.” That would tell anyone that maybe the invasion was ill conceived because while we could crush Iraq, it was the only thing holding IRAN in check.
However, badly the previous administration managed Iraq, John Kerry (as with Barack Obama) digs the trench every day to reach new lows in credibility, in integrity and in competence. Kerry was an incompetent naval officer who relied on his Skull and Bones credentials at Yale. He became a cur when he left the navy and made common cause with Jane Fonda – and friends.
Now the nation has seen fit to put this pompous fool in a position to direct American foreign policy. Pardon me for a moment while I dry my tears with the American Flag.