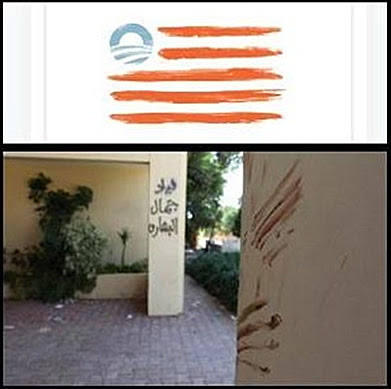 Facebook
Twitter
Pinterest
WhatsApp
Most of you have seen the new Barack Obama flag. Yes it looks a lot like a bloody handprint on the wall of the US Consulate in Benghazi where the US Ambassador was sodomized and then murdered along with two Navy SEALs who died defending him and one other as yet unnamed American who worked for the US State Department.
I’m sure that the mainstream media will never comment in any negative way about the flag, but it would seem that it’s demise from the Obama for President website has been premature. Apparently some Americans found the flag offensive? How could that be? President Obama loves unicorns, little children and rainbows. In any event, they are no longer being offered by the Obama Campaign website.
The OBAMA BLOODY HANDPRINT FLAG didn’t sit well with US service members or with veterans. Now there’s a shocker. President Barack Obama is trying hard to win veterans, but it looks like they’d prefer a new commander in chief.

The Obama campaign had been hoping that veterans and their families — especially among the post-Sept. 11 generation that served in Iraq and Afghanistan — would be part of their path to victory: They’re a high turn-out demographic and concentrated in battleground states, with nearly 1 million each in North Carolina, Ohio and Virginia, and 1.6 million in Florida.

But recent polls make clear that the president’s campaign is losing the battle. Even as Obama leads in Colorado, Florida, Ohio and Virginia, Mitt Romney is up by double digits among veterans in those states. Nationwide, he’s got a commanding 20-percentage-point lead over Obama and has even overtaken the president with younger veterans.

“It’s no contest,” said Maurice Tamman, a Reuters data news editor who has polled on veterans and the presidential campaign. (LINK)

As a combat veteran myself, I can’t imagine how any American wouldn’t feel proud to salute the bloody handprint flag because it harkens back to the day, not so long ago, when a terrorist attack on a US Consulate on September 11, eleven years after the WTC/Pentagon attack was referred to by the President of the United States as a “speed bump” on his road to appeasement of Jihadists in the Middle East. Yes, the Bloody Handprint Flag reminds me who the commander-in-chief is in his soul. And it helps me to understand why he needs to be replaced in good order by a new President who will understand that the whole thing isn’t some big joke.
Brave men and women die because of bad decisions in high places. The Obama Bloody Handprint Flag simply takes the whole matter to an obscene level.
However, to members of the Democratic Party – fly your ObamaNation flag high, and know what it represents to the rest of us. 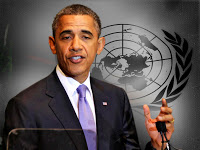 Update:
What did President Obama mean today when he spoke at the UN General Assembly today and said: “The future must not belong to those who slander the prophet of Islam…” (The Whole Speech) – NY Times
President George Washington had a different take on the same issue:
“If the freedom of speech is taken away then dumb and silent we may be led, like sheep to the slaughter.”
The entire Obama Speech wasn’t bad. It never is. But there is this innate pandering to Muslims that is not in keeping with what a President should be saying after attacks and demonstrations from Indonesia, where he went to the Muslim school, to Libya. It sends the WRONG message. 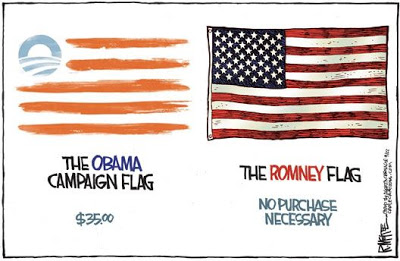