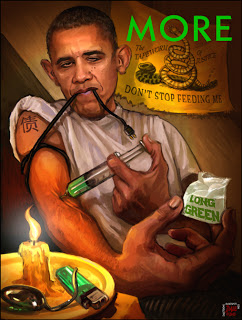 “Everything that we fought for in 2008 is on the line in 2012,” Obama said. “I need your help to finish what we started.” (Tampa Bay Times)
This one statement defines your justification to vote for Obama.
The unbridled spending under the Obama Presidency has equalled all government spending by all presidents before him COMBINED.
The $4.212-trillion increase in the national debt means that during Obama’s term the federal government has already borrowed about an additional $35,835 for every American household–or $44,980 for every full-time private-sector worker. (According to the Census Bureau there were about 117,538,000 households in the country in 2010, and, according to the Bureau of Labor Statistics, there were about 93,641,000 full-time private-sector workers.)
Since President Obama assumed office three years ago, federal spending has accelerated at a pace without precedent in recent history, taking us from an already staggering $3.5 trillion in federal spending in 2010 to a projected $5.6 trillion within the next decade. This sharp rise has been entirely a matter of choice.

Getting our fiscal house in order has become more than just an economic issue; it’s a moral imperative. Every dollar of deficit spending must be borrowed, with the bill sent to our children to pay back. As president, Mitt Romney will ask a simple question about every federal program: is it so important, so critical, that it is worth borrowing money from China to pay for it?

Excessive government spending is also harming the economy by skewing the market place and creating high levels of uncertainty. As federal funds slosh through the economy, they lift up some enterprises at the expense of others. In an environment where the government is picking winners and investing huge sums in projects of questionable value, private entrepreneurs across the economy cannot have confidence that their own investments will pay off. Aware that such spending cannot continue indefinitely, business owners also have a difficult time predicting how demand will shift from year to year and how to invest accordingly. The only recipe for fiscal health and a thriving private economy is a government that spends within its means. (mittromney.com) The American Commander-in-Chief has a hard time getting his facts straight. And the American Vice President thinks that it’s all just a joke.