As with many of you, I have become numb to the daily outrage – as many of us call the antics from this White House, from barack hussein obama and his regime.

Today he had the gall to remove CHRIST from his Easter Holiday Greeting. What follows below is not my analysis, but that of Vince Haley. To say that I can not be more outraged than I am is to suspend disbelief. Just when you thought barack hussein obama topped himself, he goes and does it again.

I understand that his faith, whether it’s Islam or Black Liberation Theology, dismisses the divinity of Jesus Christ. I understand that he as a man is incapable of understanding Easter as evidenced below. However, it’s simply another brick in the wall – one more outrage that America needs to swallow. 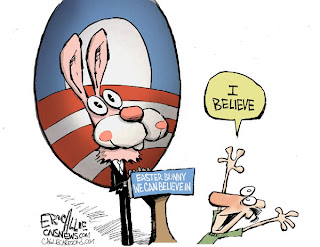