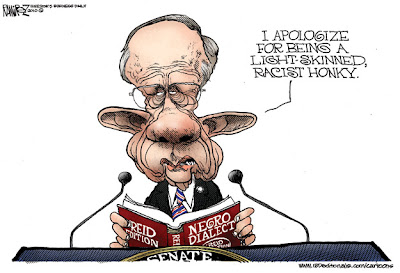 There are a lot of things that should pique Senator Harry Reid’s conscience. The religious right has suggested that, “God should call Sen. Reid ‘home’.” If Harry Reid was tapped by the Grim Reaper, I doubt he’d see heaven.

Maybe Harry’s soul would be left in between as heaven won’t want him and hell would know he’d try to take over.

Republican National Committee Chairman Michael Steele has called for the resignation of Harry Reid as Senate majority leader over remarks published in a new book calling then-presidential candidate Barack Obama a “light-skinned” black man “with no Negro dialect unless he wanted to have one.” If the Lott standard still applies, Reid should step down. However the Lott standard clearly does not apply to Reid or any of his friends. For example, Reid recently compared opponents of his health care reform bill, written in secret behind closed doors, to supporters of slavery. Where is the President of the United States in all this? Where is Barack Hussein Obama? Has he censured the nearly senile Reid?

(he hasn’t censured the clearly senile Joe (Slow Joe) Biden)
In remarks made to the New York Observer about his Democratic opponents for the 2008 presidential nomination, Vice President Joe Biden said: “I mean, you got the first mainstream African-American who is articulate and bright and clean and a nice-looking guy.” I think that Slow Joe was trying to say that Barack Hussein Obama is a ‘credit to his race’.