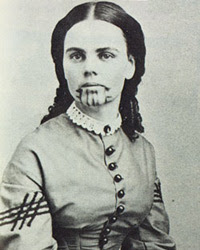 Facebook
Twitter
Pinterest
WhatsApp
You can take I-40 from Needles, California to Kingman, Arizona on your drive to Flagstaff, or you can take a detour once you cross the Colorado River that still gets you to Kingman — northbound on County Road 10.

The twist-and-turn road takes you through the city of Oatman, population about 100. And if you continue, it will dump you into livable, lovable Kingman.

“Oatman” was chosen for the name of the town in the posthumous honor of Olive Oatman (her story at this link is an interesting read), a young Illinois girl who had been taken captive by Indians during her pioneer family’s journey westward in 1851 and forced into slavery. She was later traded to Mojave Indians, who adopted her as a daughter and had her face tattooed in the custom of the tribe. She was released in 1855 near the current site of the town.

Miners pulled a LOT of gold out of the ground and then the place dwindled as the gold and some silver, played out. Fort Mojave, down on the Colorado River, on the Mojave Road**, provided army protection to the area from the infrequent Indian uprisings.

**The Mojave Road was a mail road that connected East to West. That’s another exploration route for you if you’re so inclined. I’ve made the trip from Camp Caddy/Barstow to Ft. Mojave along that road more than once. Each trip was an adventure in itself.

Today, Oatman is one of those ‘living mining towns’ that you can find here and there in the West. I don’t want to call the place a tourist trap. It’s more of a byway for those who aren’t in quite as much of a hurry to get from here to there on the Interstate.
Oatman, AZ; Silverton, CO; Virginia City, NV; Bodie, CA — and a few more cities in Arizona like this one. Each has a story. Each story is interesting and a bit larger than life. I made a report on this blog on a visit to Jerome, AZ, a month or so ago.
Wild burros roam the streets in Oatman and you can buy pellets in any of the local stores to feed them if you’re inclined. Naturally I’m a soft touch and I feed them. They are descendants of the burros that miners used well over 100 years ago to haul ore and equipment. They’re part of the local color that makes the place an interesting stop.
The City of Oatman is not near the White Wolf mine, on Arizona’s Mogollon Rim. However, it’s on the way if you’re leaving California…and the crowds…and the mawkish politicians…and all of the progressiveness.

You never know what you find it you take the road less traveled in the Old West.