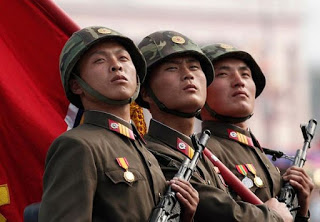 Facebook
Twitter
Pinterest
WhatsApp
The eyes of the world, including the ongoing eyes of US Satellites remain on North Korea. There are a few updates, most of which have been mentioned in the commonly consumed news outlets. I’ll ruminate over some of them for your review.
Nuclear Weapons Material Production

Improvements continue at the Yongbyon nuclear reactor complex. The imagery analysts at 38 North reported on 26 June that commercial satellite imagery from 21 June indicates that improvements to the infrastructure at North Korea’s Yongbyon Nuclear Scientific Research Center have continued since imagery of March.
The lack of steam plumes and a generally low level of activity at the facility suggest that the reactor and the plutonium reprocessing laboratory are not active. Increased discoloration of the roof of the uranium cascade building indicates the cooling fans have been active.
According to 38 North, “Modifications to the 5 MWe graphite-moderated reactor’s cooling system appear complete, but a less-than-normal cooling water discharge from the outfall pipe makes a determination of the reactor’s operational status difficult.”
Several new small buildings have been constructed and a new engineering office building appears complete.
The Yongbyon complex is named a research center, but this blog’s loyal readers should know it is the location where the fissile material for all North Korean nuclear weapons has been produced. It is a large complex.
North Korea continues to maintain the complex. It appears to be functional and its main production facilities could be operating at a low level.
The North Koreans are aware of imaging satellite orbits. Thus, anything that is visible could not be hidden, is not considered sensitive or is intended to be imaged. The published images do not show evidence of special sensitivity at the facilities in the complex, such as the presence of tarps or camouflage netting.
The complex also does not show a high level of human activity or increased energy use, which imagery satellites have detected during past production periods. However, the level of activity can be manipulated to create the appearance idleness or of a complex undergoing some upgrades and routine maintenance.
The significance is that the complex shows no obvious signs that it is operating, and no signs that it is being prepared to be shut down or dismantled. Prior to the dismantling of the nuclear test site, such signs were obvious and obviously intended to be imaged.
Handing out Kim’s Food?
North Korean leader Kim Jong Un (the only fat man in North Korea) reportedly ordered a high ranking army officer to be executed after he was accused of giving extra food and fuel rations to troops and their families. Daily NK reported that Hyon Ju Song, the lieutenant general of the Korean People’s Army in the country’s capital, Pyongyang, was executed by a firing squad for “charges of abusing authority and engaging in anti-Party acts.”
Hyon was reportedly a rising star in the army before his his screw up that led him to a pockmarked will with a last cigarette and a blindfold. He served as a member of the Workers’ Party of Korea’s Central Committee and battalion commander under the Supreme Guard Command.
“While checking the oil supplies for the Sohae Satellite Launching Station during the comprehensive inspections of wartime supplies on April 10, Hyon stated, ‘We no longer have to suffer and tighten our belts to make rockets or nuclear weapons.’  In North Korea that constitutes “famous last words”. This was seen as an abuse of authority and a treasonous statement that opposed the Party’s military-first policy,” a source told Daily NK.
The source said Hyon ordered “2,000 pounds of fuel, 1,300 pounds of rice, and 1,600 pounds of corn to military officers at the Launching Station and their families.”

“This was considered an anti-Party act violating the Ten Principles for the Establishment of the Party’s One-Ideology System,” the source said.

The officer was also accused of “failing to maintain secrecy regarding the affairs of the Party, military, and government institutions, displaying generosity by distributing unauthorized handouts, and misrepresenting the ideology of the Party,” the source said.

“The ideological poisoning that is personal idolization is corrupting the chief personnel in the People’s Army. We must nip the bud of ideological poisoning,” the source quoted Kim as saying.
If there is a moral to this story, it is, ‘don’t get between Dear Leader and food’. Just don’t.
To be fair to the Nork High Command, if people started eating ‘wartime food rations’, they’d just starve that much faster and would get accustomed to eating square meals instead of a bowl of rice and what ever rats (protein) you can catch. North Korea teeters on the brink of starvation and it’s expected to have a lower than expected harvest (again).