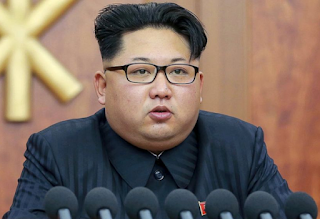 Facebook
Twitter
Pinterest
WhatsApp
Malaysian Inspector-General of Police Tan Sri Khalid Abu Bakar said investigators were able to pinpoint the substance based on swabs taken from the eyes and face of the late Kim Jong Nam.

“The chemical substance has been identified as S-2-diisopropylamino-ethylmethylphosphonothioate or ‘VX nerve agent’.”
“VX is listed as a chemical weapon under Schedule 1 of the Chemical Weapons Convention Act 2005 and Chemical Weapons Convention (CWC) 1997.”
According to the Council on Foreign Relations, “VX is the deadliest nerve agent ever created. Known by its US Army code name, it is a clear, colorless liquid with the consistency of motor oil. A fraction of a drop of VX, absorbed through the skin, can fatally disrupt the nervous system.”

VX is a powerful neuro-toxin that is used exclusively as a weapon. The substance has no taste or smell, making it difficult to detect save for its slightly reddish hue. If inhaled, doses as low as 30—50 mg·min/m3 are fatal. The substance can also kill at a dose of 10mg via prolonged skin contact, but can be safely washed off using water or household bleach.
Symptoms of VX poisoning include shortness of breath and tightness in the chest, which can be confused for cardiac arrest. (Readers will recall that North Korean authorities said Kim Jong Nam died of heart stroke.)
North Korea is one of the world’s largest producers and stockpilers of chemical weapons of mass destruction. Public testimony by senior defense officials indicates that the North Korean inventory is 2,500 – 5,000 metric tons.
Experts judge that North Korea has weaponized 20 different kinds of chemical agents. North Korea’s favorite agents are mustard, phosgene, sarin and V-agents, including VX. The two-step process of applying VX to Kim Jong Nam’s face by two separate assassins indicates facility in developing VX in a binary form, which is safer to transport.
For many years, North Korea’s primary delivery systems for chemical weapons were artillery and rockets. North Korea adapted Soviet artillery doctrine for sequencing chemical weapons shells with conventional explosive shells in an artillery attack. It is certain that chemical rounds would be used in artillery attacks in a war against South Korea.
With the development of its ballistic missile program, North Korea is believed to have created a significant inventory of chemical warheads for its ballistic missiles. The significance of this brief overview is that it shows that the North Korean intelligence services and armed forces became proficient with chemical weapons of mass destruction before they had a working nuclear program.
Prior to Kim Jong Nam’s assassination, the only VX attack reported in open sources was the Aum Shinrikyo murder of a suspected spy in its organization in Osaka, Japan, in December 1994.
The determination that VX was the cause of death tends to implicate North Korea because Kim Jong Un had a motive to kill his half-brother and none of the other admitted VX producers have. The other admitted producers are the US, Russia and Syria prior to the Syrian civil war. 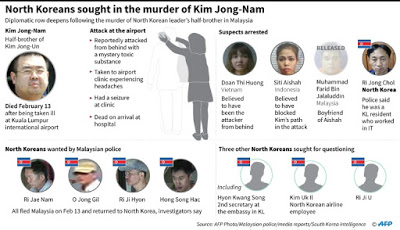 For Malaysia, the assassination might be a deal breaker in relations with North Korea because North Korean agents used a chemical weapon of mass destruction in Kuala Lumpur.
The NORKS Blame China
The Korean Central News Agency (KCNA) published on 23 February a signed commentary that criticized and disparaged China. The comment is titled, “Shabby Behavior and an Infantile Calculation.” Key excerpts follow.

“Under the energetic guidance of the respected and beloved comrade supreme leader, we completely succeeded in the test-firing of a ‘Pukku’kso’ng-2’-type surface-to-surface medium long-range strategic ballistic missile on 12 February. This heroic feat that we performed this time has instantly rocked the world and the international community is definitely acknowledging our nuclear attack capabilities that have achieved a leap in quality….”

“Nonetheless, a neighboring country which talks about ‘a friendly neighbor’ whenever the opportunity presents itself, is downplaying the significance of this time’s test-firing, saying that ‘it is a nuclear technology which is only in the initial stage,’ ‘North Korea will suffer the biggest loss,’ and so on.”

“In particular, on the pretext of the UN ‘sanctions resolutions’ — which are legally unjustified — it is unhesitatingly taking even the inhumane measures of totally blocking even the foreign trade related to the improvement of the people’s living standards.”

“It is taking such measures while chanting as if it is its habit of speaking that the UN ‘sanctions resolutions’ should not affect the people’s daily lives. This, in actuality, is not different from the maneuvers the enemies are kicking up to bring down our system.”

“While dancing to the tune of the United States, without its own opinion, the country claiming to be a so-called big country is defending itself by saying its dirty behavior is not to affect our people’s living but to deter our nuclear program.”

“In this regard, the just voices of the world are laughing at it, while saying that ‘the neighbor which is big in size is imposing sanctions on North Korea to please the United States,’ but the hostile forces against us are uttering yells of delight.”

“We will churn out the ultra-cutting-edge weapons that no other people have ever seen and no other countries have ever possessed, because we have the self-reliant national defense industry which great leader Comrade Kim Il Sung and great leader Comrade Kim Jong Il founded by devoting their whole lives and because we have the national defense scientists and technicians struggling by holding high the slogan of faith that the party center’s strategic plan and intent precisely mean practice and by making their hearts afire with a do-or-die resolve.”

“With these weapons, we will safeguard peace and stability in Northeast Asia and in the rest of the world through our own strength. Through today’s reality as well, our people are once again keenly realizing how correct our party’s simultaneous line is.”

“We will advance invariably and straight along the path of the simultaneous line (of nuclear production and economic development” and will deal a heavy blow to the United States and its follower forces and will achieve a final victory with the almighty nuclear deterrent.”

China is not mentioned by name, but it is the only ‘friendly neighbor’. The actions that offend North Korea are those taken by China.
The use of a signed comment, rather than an official statement, is always intended to provide the regime with some measure of deniability about the content. This is a fig leaf. Every article published by a North Korean outlet is written by a government or party official and is approved by a Korean Worker’s Party Secretary. The author’s name is a pseudonym. One translation is “righteous pen.”
This is the first North Korean reaction to China’s suspension of coal imports. It also is the first time North Korea has criticized China so openly. The comments are deeply insulting to China.
Thoughts on the Nork Nuclear Missile Program
The criticism is noteworthy in several respects. The North Korean author, and the Worker’s Party Secretary who approved the publication of the commentary, revealed that North Korea understands China’s criticism of the missile launch as part of its opposition to North Korea’s nuclear program. The implication is that the reason China criticized the 12 February missile test is because China judges the new missile is being designed to carry nuclear warheads.
A second theme is that China’s sanctions are identical to those of North Korea’s enemies. The implication here is that North Korea perceives that China is becoming, or at least acting like, it is North Korea’s enemy.
A favorite theme is the North Korean accusation that the UN always does the bidding of the United States. Thus, China is not acting independently.
The commentary ends with a patriotic paean to the Kims; a defiant statement that the programs will continue and the threat of “heavy blow” to the US and its follower forces, which could be construed to include China. Chinese relations with North Korea are in crisis. The sanctions will not be allowed to impede North Korea’s nuclear and missile programs, regardless of how they affect the populace.