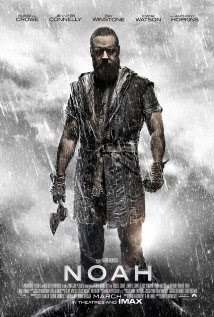 This will have to pass for your Sunday Sermonette.

The Muslims and Evangelical Christians are saying, “Don’t go to see the movie, Noah.” So I went to the theater armed. I’m usually armed, but I slid two spare magazines of Hornady .45 ACP +P in my pocket just in case some whack job decided to take out the viewers. I survived without having to suppress one or more of the faithful.

I like Russell Crowe as an actor and think that the movie was interesting as an eco-revisionist, post modernistic, sci-fi piece — blended with USC film school writing and beat plotting. I can’t say that it’s based on anything in the Bible. It’s more of a Gligamesh of Uruk** story than it is what you’d consider a traditional Biblical theme. There is no actual communication between God and Noah, which is in keeping with a Hollywood production that can’t be religious. I liked the giant rock people/angels who pitched in to help Noah build the ark, and slaughtered the standard wicked humans who decide they want a ride on the boat. While not mentioned in the Bible, it does lend a sense of drama to the whole epoch. The stow-away on the ark (spoiler) is interesting and lends more drama to the story, which holds its own drama even if one follows the Biblical account faithfully.
SUMMARY: There was global warming (pre-internal combustion engine, which is confusing), an homage to homosexuality, science fiction style rock angel aliens, no mention of God per se — wait for the Academy Award.
Bill Cosby’s take on it is more Biblical than the Noah movie now in theaters:

**Gilgamesh, King of Uruk (modern Iraq), was the last king of Sumeria and at one point, he journeyed to visit Utnapishtim (Noah), who survived a great flood. Noah, the sage, was reputed to be Gilgamesh’s great-great-great grandfather, who told him the story of the flood, the ark, etc.