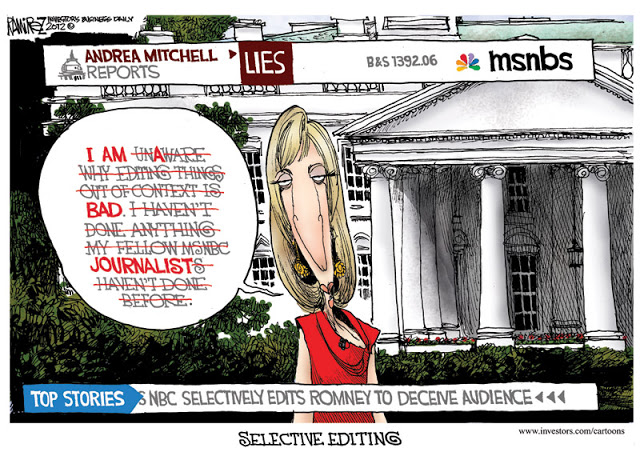 Facebook
Twitter
Pinterest
WhatsApp
We all know that the mainstream media (as typified by NBC/MSNBC) wants to be able to pick their choice to win (Obama) and lose (Romney) by pushing the electorate in the upcoming presidential election. The only question is how far are they willing to go to achieve their ends.
In Ayn Rand’s novel, The Fountainhead, Gail Wynand, who stood for nothing during his long journalistic career, except to give voice to the worst aspects of human nature, has a devastating epiphany when he finally takes a stands up for the Good. Wynand had always deceived himself into believing that he controlled the narrative and shaped public opinion; that he was the ultimate power who controlled things and events. But he was just a pawn all along; a pawn of forces that represented the worst aspects of human nature. He was not the master; he was the slave.
No, I’m not suggesting that Brian Williams (famous NBC Anchorman) is going to stand up for anything good. Not at all. He’ll keep to his snide, whining opinions about the somehow less than worthy Republicans and the noble virtues of Barack’s ObamaNation and it’s collectivist vision of ‘fundamentally transforming America’.
NBC hosts and commentators continually, cynically suggest that there is something wrong with:

One might be able to argue that MSNBC is simply following Alinsky’s Rules for Radicals, thus they are “within the rules” in their treatment of Candidate Romney. 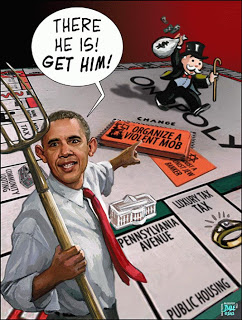 1. One’s concern with the ethics of means and ends varies inversely with one’s personal interest in the issue.
2. The judgment of the ethics of means is dependent upon the political position of those sitting in judgment.
3. In war the end justifies almost any means.
4. Judgment must be made in the context of the times in which the action occurred and not from any other chronological vantage point.
5. Concern with ethics increases with the number of means available and vice versa.
6. The less important the end to be desired, the more one can afford to engage in ethical evaluations of means.
7. Generally, success or failure is a mighty determinant of ethics.
8. The morality of means depends upon whether the means is being employed at a time of imminent defeat or imminent victory.
9. Any effective means is automatically judged by the opposition to be unethical.
10. You do what you can with what you have and clothe it in moral garments.
11. Goals must be phrased in general terms like “Liberty, Equality, Fraternity,” “Of the Common Welfare,” “Pursuit of Happiness,” or “Bread and Peace.”

A Ray of Hope?