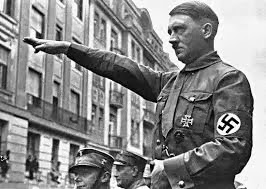 Facebook
Twitter
Pinterest
WhatsApp
I’m not saying that America needs to intervene with military force. However, the similarities between the two are striking in their similarity. This is made possible by American weakness ad by having an a wimp in the White House. I doubt that the Russians would have dared do this if Ronald Reagan was president. In fact when you think about it, Reagan made them tear the wall down. Obama is, in effect, saying, “Mr. Putin, build up that wall!”
NOW

Putin says the move is needed to protect ethnic Russians and the personnel of a Russian military base in Ukraine’s strategic region of Crimea. The request comes a day after President Obama warned Moscow that “there will be costs” if it intervenes militarily in Ukraine.

(Wikipedia) The German occupation of Czechoslovakia (1938–1945) began with the Nazi annexation of Czechoslovakia’s northern and western border regions, known collectively as the Sudetenland, under terms outlined by the Munich Agreement. Nazi leader Adolf Hitler‘s pretext for this effort was the alleged privations suffered by the ethnic German population living in those regions. New and extensive Czechoslovak border fortifications were also located in the same area.

You can cast chicken bones to determine the future of Ukraine, but it would be more effective to read history.

Ukrainians who thought the European Union states and the US would come to their rescue are destined for disappointment. In his press statement today, the US President did not say that instability in Ukraine affected US interests. Some analysts interpreted that omission as an American “green light” to the Russians to do what they consider appropriate.

The US is sending US$1 billion in aid to Ukraine. I wouldn’t be surprised if it ended up in the Crimea, used by Russia to feed the newly conquered region…