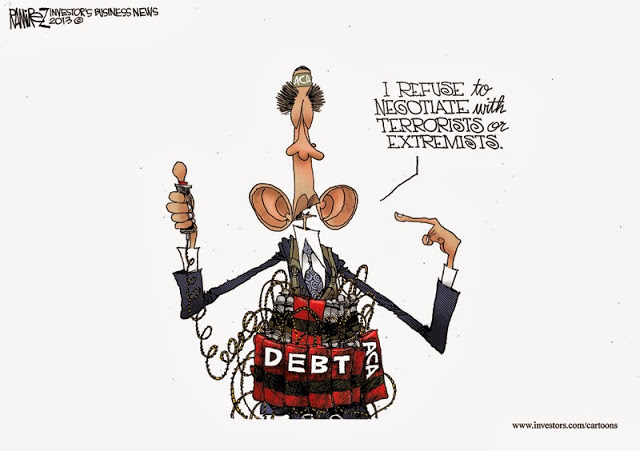 One of the nation’s top credit-rating agencies says that the U.S. Treasury Department is likely to continue paying interest on the government’s debt even if Congress fails to lift the limit on borrowing next week, preserving the nation’s sterling AAA credit rating.

In a memo being circulated on Capitol Hill Wednesday, Moody’s Investors Service offers “answers to frequently asked questions” about the government shutdown, now in its second week, and the federal debt limit. President Obama has said that, unless Congress acts to raise the $16.7 trillion limit by next Thursday, the nation will be at risk of default.
Not so, Moody’s says in the memo dated Oct. 7.

“We believe the government would continue to pay interest and principal on its debt even in the event that the debt limit is not raised, leaving its creditworthiness intact,” the memo says. “The debt limit restricts government expenditures to the amount of its incoming revenues; it does not prohibit the government from servicing its debt. There is no direct connection between the debt limit (actually the exhaustion of the Treasury’s extraordinary measures to raise funds) and a default.

Some of you will be shocked that Obama and the Democratic Party are misleading the American people (yet again).  There is a real difference of opinion over the consequences of congressional inaction on the debt limit

During a press conference at the White House Tuesday, Obama said missing the Oct. 17 deadline would invite “economic chaos.” If economic chaos means that the President won’t get his narcissistic way, yes, then it would be chaos.
The president may direct his Treasury Department to default on payments. But it’s not necessary now and it won’t be in a week from now.