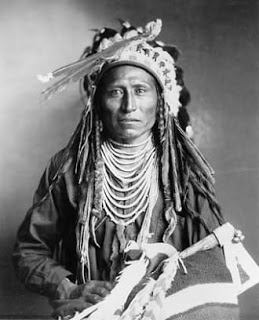 Facebook
Twitter
Pinterest
WhatsApp
We’re all Indians Now
Some of you will recall that I had a family legend that circulated my entire life, suggesting that I had relatives who were part Creek. In fact, if you believed the legend, I was 1/8 Creek. I swallowed the lie because it was convincingly delivered.
I found genetic comfort in the fact that I like both knives AND tomahawks.

With modern family search/ancestry/DNA resources available, I found that the story was a complete fabrication. Those ancestors who were said to be Indian were white as were their ancestors and there were documents (original images on-line) to prove it, going back to the 1600’s. In those days, a declaration of race accompanied birth and christening documents because right-to-inherit, own land, vote, etc. was tied to that issue in whole or in part.
My mother had framed photos of my Indian ancestors on her walls. Total bilge water. Her brother, my uncle, had his whole self image wrapped around his ancestry, and now, into his early 80’s, it’s been stripped away by modern technology.
BUT WAIT, there’s hope. Senator Elizabeth Warren is claiming that .9% Native American DNA makes her an Indian. It could have been Aztec or some sort of South American rather than Cherokee, but she proclaimed herself a squaw. Maybe my mother and uncle are Indians when you apply that standard!
The next question is where I need to go to get a piece of the profit from the casinos and oil wells. And don’t I qualify for some sort of allotment due to my minority status? The government owes me hundreds of pounds of free cheese that I never claimed.
Hungary Takes a Stand
Hungarian Prime Minister Viktor Orban, signed a decree, which went into effect last Saturday, removing gender studies from a list of approved master’s programs.

“The Hungarian government is of the clear view that people are born either men or women,” Orban’s chief of staff said in August. “They lead their lives the way they think best, but beyond this, the Hungarian state does not wish to spend public funds on education in this area.”

Apparently he did not take into account that there are 32 possible gender identification options (the rules for determining what “you” are remain fungible on a daily basis), many of which are recognized through Europe and the US. Imagine the thought that people are born as men or women?