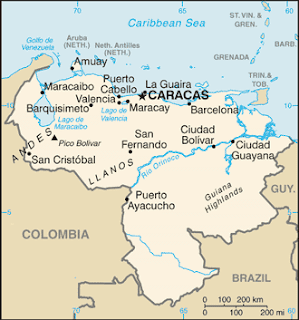 Will the President of Venezuela (Juan Guaidó) reach out to the international community for help in removing the OTHER Venezuelan President, and Dictator-for-Life Nicholas Maduro? And if that were to happen, would Brazil and Columbia ask for aid from the USA in doing that?
And if they asked, would America answer, now that the State Department has left the US Embassy in Caracas and burned all of the classified documents?

Note: Before any military action, nations close the embassy and burn files. The file destruction has not been mentioned, but no country vacates its embassy without removing or destroying sensitive files, such as any record of contacts with the opposition.
This is always a pre-war action. It does not mean that military action is likely, but it clears away one of the inhibitors for military action.

President Trump did not run as a “nation builder” or as a military interventionist, but if Brazil and Columbia begged the US for help? If the face of the “restoration of order” was Latin American troops, possibly flown in by US aircraft?
The US can wipe out the Venezuelan air force in something like four minutes, but would the goal be to break equipment that the new democratic government will need? I think that a no-fly zone, with US aircraft enforcing the rules is a more likely scenario – while the other Latin American countries restore order, remove the pretender to the throne (Maduro) because he’s a tyrant, etc.
Naturally, the Democrats in Congress would be wounded at the thought of a tyrant removed, but if Brazil did it…and President Trump is only helping the Latin American coalition to return all the refugees to their homes?
Sit back with your popcorn and watch. Maybe that’s the plan. Maybe it’s not