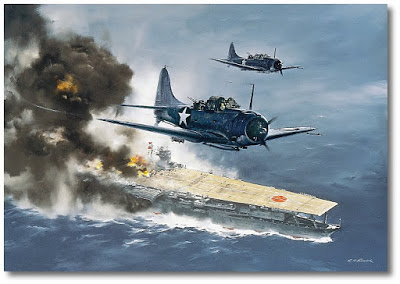 Facebook
Twitter
Pinterest
WhatsApp
41 Devastator (torpedo/bombing aircraft) launched during the battle produced no torpedo hits and only six survived to return to their carriers. The torpedo bombers were great decoys, for the dive bombers. The movie gets a lot of things right, a few things were omitted, such as F4F Wildcat fighters. The sacrifice and bravery of the aviators (Navy and Army Air Force) that led to the demise of four front line Japanese aircraft carriers can’t be overstated and the film does a good job laying that out.

The workmen at the docks that repaired the damaged Yorktown in 72 hours, and set sail with the aircraft carrier, which would lend weight to decide the matter were likewise brave. It was a total war, and before Midway (at the Coral Sea, in the Philippines, etc) that Japanese gave a lot more than they got. They were dark days.
The movie was worth viewing, even though I’ve read just about every book written about the Battle of Midway.
America paid a very high price by not being ready for War. It’s a lesson for the current generation. The “miracle at Midway” changed the momentum of the war. But best not to have to rely on miracles.