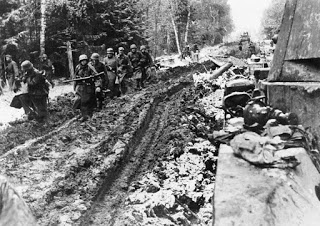 
The invasion of the Soviet Union by Nazi Germany (Operation Barbarossa) is said by many to be the decisive campaign in the European/Eurasian Theater during World War 2. It failed, and doomed the Germans to defeat.
(German) Army Group Center, the most powerful and important of the three army groups deployed, ground to a halt at the gates of Moscow. After that, it was a long, miserable retreat. The German High Command was conflicted because (as with the Japanese), ‘victory disease’ had set in. The Germans had a well trained, experienced, victorious field army and from where they stood, they were certain that the Russians would be defeated within the first six to eight weeks of fighting, long before the Wermacht reached the Dnepr-Dvina line.

But things don’t always go to plan. When the intelligence developed by the German military was deeply flawed, as it was, they would have needed much more luck than they ended up having to find a victory in the long Russian retreat. By mid-December 1941, the Germans had lost the initiative. Then the Russians took their turn.

The profoundly racist outlook of the Nazi state absurdly inflated the abilities of the German military (“The German soldier can do anything!”) and belittled the combat capabilities of the Russians, who turned out to be able to fight much harder and more skillfully than expected, as the Germans themselves would ruefully admit. Slav is the root word in slave. Hardly a match for the master race, but these are Russians that we’re discussing and they were capable of absorbing massive damage in the macro sense. Nobody thought that a communist ‘slave army’ would stand. But they were fighting for hearth and home. The Germans discounted that.

Given the vast distances involved, the logistical resources available to support this huge battle were utterly inadequate to the task. The professional reputations of the German officers who planned and carried out Operation Barbarossa were been inflated beyond their true quality. 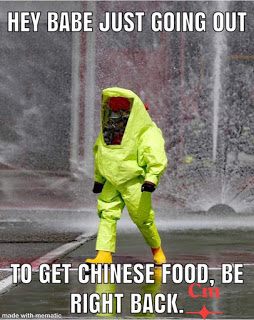 One of the largest security companies in China, located in Shanghai, e-mailed me and informed me that they were shutting down until the plague has ended. You’d think that the present crisis would be just the chance for the security company (its officers are armed with handguns) to deploy in strength, but that’s not how it’s rolling.

A serious crisis in China? You be the judge. An accidental release of an engineered virus from a Chinese BioWeapons Laboratory? Again, I leave it to you to decide.

The Russians closed their border with China today at a time when their business with China was on the rise.

Some say that the Chinese are getting what’s coming to them, but starting a pandemic impacts a lot more people than the communist Chinese. And all we can do at this point in time is to watch it play out.

Will the Democrat effort to “Kavanaugh” the impeachment hoax succeed? We’ll know later today. With any luck at all, the Senate will dismiss this farce and the nation’s lawmakers will get back to work.

“The hysteria rises when reality refuses to validate the voices in your head.” The corrupt, lying, smug, sly, mainstream media will be howling. F em – sideways. They will continue the coup, but it will be more muted. I’m not saying that they’ve shot their bolt, but it’s difficult for them to keep up the impeachment narrative that they’ve been working on for three years.