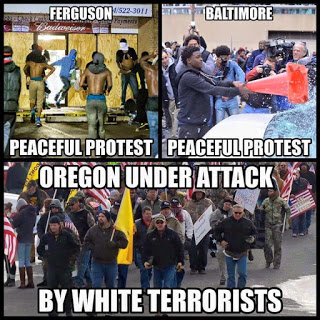 Facebook
Twitter
Pinterest
WhatsApp
If you’re reading my blog, you likely join me in a certain level of disgust with the mainstream media, which follows one agenda at the exclusion of all else including reporting the news in a fair and balanced way. There’s an “Occupy” situation going on at the Malheur National Wildlife Refuge headquarters.
I am trying not to take sides in this and to present as fair and balanced an account as I can here.
The Left presents the case that the problem began during the Reagan Administration with a retreat from “saving the planet” and an effort to return sovereignty disputed range land to property owners. This is firmly at odds with the efforts under the Obama Administration to reclaim land owned by private individuals by manipulating the law and bending the rules to the extent possible. The government agencies engaged her are the the Bureau of Land Management (BLM) and to a much lesser extent, the Environmental Protection Agency (EPA).
The situation at the Malheur National Wildlife Refuge in Oregon (M-NWR) is characterized in the news as a stand-off between armed white people and the US Government.  I will try to present facts and let you, the jury make of it what you will.
In 1964, Dwight Hammond – 73 (and his son, Steve – 46) purchased a ranch in Oregon’s Harney Basin, comprising about 6000 acres of privately owned property adjacent to the M-NWR. Included in that purchase were:

For those of you who are unaware, rights to water use (i.e. water rights) are property rights that are transferred in much the same way that a patent deed is transferred. Rights to graze cattle on public lands can be altered by the Bureau of Land Management based on prior notification and are not transferred the way a property right is.

During the 1970’s the Bureau of Land Management expanded the Masher refuge by buying many of the ranches that bordered the government owned refuge. Eventually and over time, the refuge surrounded the Hammond ranch. BLM tried to buy the Hammond’s ranch on many occasions but they refused, as did several other ranch owners.
BLM determined that “grazing livestock is detrimental to wildlife and must be reduced”. About 60%  of the grazing permits on PUBLIC LAND were revoked, forcing a number of ranchers to leave. Permit fees were raised exorbitantly. The argument the Hammond family advances is that the government was forcing them to sell. However, the permits did not pertain to their land. Only to federal land.

As one who grew up around cattle, I do understand the need of ranchers to graze their stock on BLM land in the West, however, there is no RIGHT to do that and the government as a steward of the land has the right to regulate the cost of grazing permits. Like it or not like it, that’s how it is.

The Hammond family refused to sell their ranch to the government, and the water sources, legally owned by the Hammond family were fenced off by BLM since they had to cross part of M-NWR to reach it.

In most cases there is an easement to deal with this sort of situation, but BLM seems to have wanted the Hammond’s land and exercised every legal right to get it.

Burning
In 2001, Steve Hammond started a controlled burn on his property. It spread to public land where burned 127 acres and was extinguished by the Hammonds. This did not result in any legal action.
Five years later, in 2006, lightening ignited several fires that merged and threatened both the Hammond’s winter range and their ranch house. To save the situation, Steve Hammond started a backfire. The backfire saved their range, home,  and put out the lightening generated fire that had already burned several thousand acres.
BLM went to the local sheriff’s department and asked them to investigate Steve Hammond for arson. The sheriff investigated and referred the case to the local District Attorney’s Office, and the DA’s office refused to file a case based on insufficient evidence to indicate that a crime had been committed.
In 2011 these (old) incidents were filed by BLM with the United States Attorney, which alleged “terrorism” against both Dwight and Steven Hammond. The federal government’s argument included their allegation that the fires had been started to cover up poaching activity — though how that translates to “terrorism”, mystifies me.
In June 2012, they were both convicted. Even though the terrorism law prescribed a minimum sentence of five years the judge cited the Eighth Amendment and gave Dwight three months and Steven twelve. They began serving their sentences January 4, 2013. Dwight was released in March 2013 and Steven in January 2014.

Amendment VIII: Excessive bail shall not be required, nor excessive fines imposed, nor cruel and unusual punishments inflicted.

BLM appealed the sentence to the Ninth District Court of Appeals, requesting that the Hammond brothers be remanded to federal custody again to serve out the entire five-year sentence. The Ninth Circuit agreed and the Hammonds reported to the Federal Prison at Terminal Island, California this afternoon to serve out their sentences. The court further ordered the Hammonds to sign a stipulation that BLM has right of first refusal in any sale. In other words, if they ever sell the ranch, they will have to sell it to the US Government.
Furthermore, the Hammonds were ordered by the court to pay $200,000 to BLM forthwith for past grazing fees or to sell the ranch to the US. Government to settle their debt.

As a result of this conduct on the part of the US Government, people have broken the law by occupying the (formerly empty) office of the M-NWR to protest the government’s actions.
To YOU the jury:
Is protest against government actions in this case warranted?
A Few Thoughts
Because the protest is underway and because the Federal Bureau of Investigation (sometimes referred to by these protesters as the “Federal Bureau of Intimidation”) is now charged with breaking up the protest, “Nothing to see here, move along,” there is the possibility of a spark that will cause other and potentially more violent behavior.
I have confidence that the FBI does not want a fight. I am also confident that there are people with an axe to grind against the feds who do want a fight.
The Hammond Family owes $400,000 for grazing, of which $200,000 is due now. That’s not in dispute. The Hammond family knew the fees involved and grazed their cattle on BLM land. The default requirement that they sell to the Federal Government makes the whole thing stink to high heaven.
I have not read the Federal Government’s case for charging the Hammonds with “terrorism”, but based on what I have read, it’s a very NARROW interpretation of the law, and it makes the whole thing look like a trumped up land grab.
More news here from Oregon Live, Fox News