Maille, or mail as it is anglicized, is a type of armor made of small interlinked metal (iron, steel, brass…) rings. It is also sometimes referred to as chainmail, which is a neologism dating back at least to the 19th century, mistakenly using mail to mean armor as a whole. 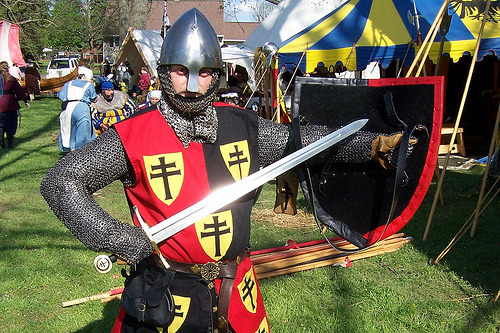 A reenactor wears the equipment of a 11th/12th century knight, featuring complete maille armor under a tabard and a nasal helmet.

Maille armor was likely invented in several different locations in History, with the Celts usually being credited with creating it as far as Europe is concerned. It is one of longest lived types of armor and was used as early as the Iron Age all the way to the modern day, where it has been used as anti-shark armor by divers, and by specialty police units in France and England as a defense against Muslims, wielding knives (some things never change).

It was historically worn alone or as a complement to various types of plate armor. It was reliable against melee blows and projectiles, but with a distinct advantage when dealing with slashes from an edged weapons. Due to its flexibility however it did not do well against blunt weapons.

With each ring being linked to about half a dozen other, maille acted in all intent and purpose like a very heavy sword-proof fabric, making it very useful to protect the joints of a rigid suit of armor. When used as a full suit or shirt, the weight of maille armor would be carried on the shoulder and at the waist by using a belt. It was usually worn over at least a fabric garment and more usually some kind of padded armor like a gambeson.