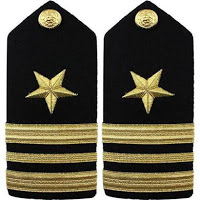 Yes, I do. I also read the US Naval Institute blog and their publication, Proceedings.

I don’t know many naval officers who haven’t been attacked at some point in time by the service. Some survive and some do not. It’s worse now than it has ever been and I can tell you that while I treasured my service in the Navy and in Naval Special Warfare, that I wouldn’t do it again in today’s environment. In a profession where you are expected to kill people for a living, there is a sentiment that you need to be kind while doing it, and sensitive to their race and gender as you squeeze the trigger. That dog don’t hunt.
It’s obvious that Commander Salamander is a man with some experience:

Commander Salamander: You will never find out faster the character of those you call acquaintances and friends than when you find yourself in any kind of scandal. At the first gust of crisis, the thin, hollow, and poorly anchored are the first to disappear. As the gale increases, more and more break away until sometimes you are alone. Being alone as the world around you swirls out of control is a nightmarish place. If you are the cause of the chaos, it is easy to fall in to self-pity at best, life-threatening depression at worse.

…Lastly, I have to say the advice I took myself and told anyone who would listen after Tailhook holds true.
1. Never live on base.
2. There is no such thing as a Navy social event, they are work events.
3. Never have more than 1-drink per hour at a Navy social event. Better yet, only have one drink, none if you can.
4. Show up on time and leave early.
5. When deployed, be exceptionally careful who is on your liberty crew. The smaller the better, and if possible, if you are a male do not include a female who has a DOD ID. If you have a female on your liberty crew, see #2-4 above and perform a filtering iteration of this bullet. Spin off a single sex sub-group NLT 2100 or two drinks, whichever comes first.

Admiral Moran is not the first person to be accused of being ‘politically incorrect’ nor will he be the last. The Navy is not without its flaws (Google ‘Fat Leonard Scandal’). The Inspector General’s witch hunts are legendary.
Shifting gears only slightly, think about the corrupt Federal Bureau of Investigation, which generated an ‘insurance policy’ to try and keep President Trump from ever being seated as President. This activity took place at the very highest levels and was generally accepted as the sort of thing that is done. Many Americans accept that what the FBI and other trusted institutions say about people is true. They are taken at face value. The alleged attack on the USS Maddox and USS C. Turner Joy, operating in Vietnamese waters led to the Gulf of Tonkin Resolution and to the death of over 50,000 Americans in a worthless war. It was totally fabricated.
Somebody didn’t want Moran to be Chief of Naval Operations and they stabbed him with a poison pen.

Life at 7,500 ft is good. The house is complete and while I still need to acquire some stuff to flesh out the decor, it’s very livable. My den does not (yet) look like the Imperial War Museum, but it will in time (as other dens have before). Dinner tonight is taquitos with guacamole, corn cakes with carnitas on them, and cherry jello with pineapple in it. Yes, it is cultural appropriation.
Our fellow friend and blogger, LSP
Fell off an unbroken horse and broke his femur at the hip. I know that he will report more in detail, but he should be home from the hospital. He will have a long recovery.

Mike_C commented (in part) and I react:

Mike, you’re overly generous in asserting that people who work in HR have an 85 IQ (taken as a group). I recall one inner city person who worked for the government in an HR management capacity who used to hide under her desk with the lights off and the door locked. I’d have to fetch a key (she continually ordered the lock to be changed), walk in, pull back her chair and look at her under the desk and deal with things that she should have done and didn’t. Because of her status as a female of the inner city persuasion, she was immune from disciplinary action. I’d be surprised if her IQ exceeded 60.

Reparations will never happen because they are not really wanted by the Left. It’s a much better deal for them to keep flogging the rest of us with entirely undeserved guilt, whereas an actual cash payment would provide the basis to say, “Now you’ve been made whole, so shut up and move on with your life.”

Precisely. Hope and Change means that you can grind that axe forever so long as you vote Democrat, but you’re never going to get what you want because you’d likely vote Republican after the fog of rage lifts and you realize that you’ve been punked — hard — over and over again.

See where the wyman team captain is calling for a “conversation”. By that, as I understand, they harangue anyone who doesn’t complete agree with them until the harangued gives in.

That’s the new buzz word isn’t? We need a conversation – the same as a woman saying “we need to talk”, means that things are about to get nasty. The lesbians are going to beat that dog to death, aren’t they. There is a solution. They can join Men’s Soccer by self-identifying as men, which they are in behavior if not plumbing.
What is your assessment of the situation in Sudan?
On 5 July, the military junta and the main opposition group reached an agreement on power sharing. They agreed to establish a council of sovereignty by rotation between the military and civilians for a period of 3 years. The deal provides for a sovereign council that will operate as a collective presidency, with five members each from the protest movement and the military. An 11th member will be a civilian selected jointly by the two sides.
The transition agreement is essentially unchanged from an earlier version that the military junta rejected. Experts judge that the agreement is fragile because the junta has reneged on past promises, and three years is a long time for a political transition to last without serious upheavals. Dissident groups have denounced the agreement because they were excluded.
The poor economic conditions in Sudan provide a strong impulse for both sides to adhere to the agreement and act with restraint for a time. It is important to recall that the action that triggered the ouster of Omar al-Bashir and three months of opposition demonstrations was a tripling of the price of bread.
While the US should monitor the situation in Sudan as it does other horrible places, such as Yemen, there is not and there should not be any reason for us to involve ourselves past the matter of monitoring.