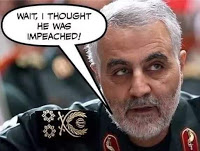 The Ayatollah said, “You can’t do a damned thing.”


And then his favorite general’s meat was harvested.

My youngest daughter texted concerned about an impending World War Three.
I asked, “who are Iran’s allies?”
She replied, “I don’t think that they have any.”
I replied, “So it comes down to Cowboys and Iranians.”
Iranian sponsored terror events would result in a relentless bombardment of the Persian Empire. They may try something, but it won’t end well for the Ayatollah or his entourage. No more buggering little boys and screwing off all day. No more torturing people for fun and profit. The cost to Iranian leadership would be high. The US is an existential threat to them, as Soleimani learned first hand.
Should President Trump have notified Congress?

In a Friday post on his Facebook page, Levin explained that President Trump not only has the authority to authorize such military strikes, but also has little reason to do so, considering how Democrats, such as those in the House Intelligence Committee, are actively seeking to effect a coup against him and leaking information that endangers U.S military personnel.

“Trump didn’t confer with Congress? Uh, Congress has been on recess. Moreover, the House Intelligence Committee has spent months orchestrating a coup against our president rather than doing its job protecting America from, among others, the terrorist regime in Iran.

“But a president is not required to alert Congress to a real-time defensive military action. So Pelosi and her ilk can leak and put the military action at risk? These Democrats are undermining our security. We were attacked by the Iranian regime.” 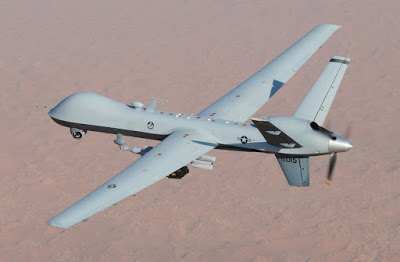 All that’s required is a presidential finding – a secret document prepared by the White House Counsel and given to the president to review and sign. There are two varieties of findings: Lethal and Non-Lethal. The strike on Soleimani and friends was a lethal finding.
The US has been flying lethal strike missions all over the planet for the past twenty years, based on lethal findings. What makes Soleimani special? Nothing. Iranian clerics loved the bloodthirsty bastard because he was their boy. And his time came and his meat was harvested and roasted by an aptly named Hellfire Missile (AGM 114) launched by an equally well named MQ-9 Reaper.

The finding makes it legal. Both Bush and Obama signed hundreds of them. The only reason that the left is howling now is because they hate the president.