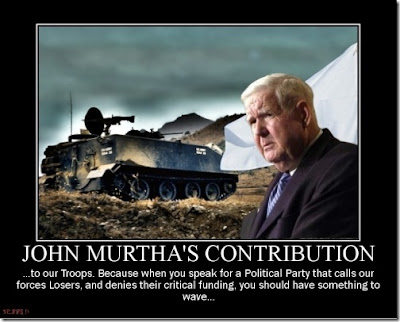 I have been pondering the make up of the Congress and yes, the natural “worst pick” is Nancy Pelosi. As bad as Pelosi is, she really only basks in the shadow of Congressman John Murtha, Democrat, representing Pennsylvania’s 12th District.

John Patrick (Jack) Murtha Jr. has been in Congress since 1974. He is the poster child for why we must have term limits (note the video below).
* Murtha knows better than to call the US Armed Forces “loosers”, he was a Marine Corps Officer, serving during the Vietnam War (retiring from the reserves with the rank of colonel). As such, he owes a certain kinship to his fellow servicemen, but there is no indication of that. He denied critical funding for US troops in Iraq from his position as chairman of the House Appropriations Defense Subcommittee.
* During the notorious Abscam investigation, Murtha took a $50,000 bribe then waffled slightly. He was an informer, testifying against two other Democratic Party Congressmen (Frank Thompson and John Murphy)
* Murtha said, “American presence in Iraq is more dangerous to world peace than nuclear threats from North Korea or Iran.” (CLICK HERE FOR SOURCE)
Note Video: Charles Gibson (no friend of anyone) does a story on but one of Murtha’s excesses that has lead to millions of wasted tax dollars.
* To his credit, Murtha usually opposes government funded abortion and gun control. Still and all, there is little good in this bloated, demigod.
Thank you for your years of service
Congressman Murtha.
It’s time for you to go.