Israel – The right to exist? 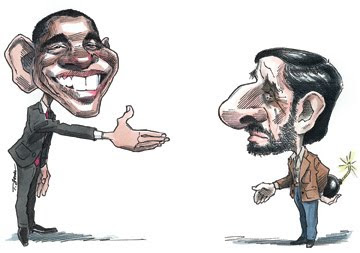 Earlier today (September 18, 2009), Iranian President Mahmoud Ahmadinejad said of Israel, “This regime will not last long. Do not tie your fate to it…This regime has no future. Its life has come to an end.”

Going on, Ahmadinejad pronounced, “The pretext (Holocaust) for the creation of the Zionist regime (Israel) is false…it is a lie based on an unprovable and mythical claim.” Since it is Rash Hashana, there is an annual Anti-Israel Day in Iran to coincide with the Jewish Holiday. “Confronting the Zionist regime is a national and religious duty.”
Emboldened by a US Administration which has shown itself to be weak and indecisive, Iran has thrown it’s nuclear card on the table once again. Ahmadinejad, who has the backing of Supreme Leader Ayatollah Ali Khamenei (head of State in Iran).
The question for the United States, Great Britian, Canada and the Western Powers is whether or not Israel has the right to exist – because Dear Leader, a closet Muslim, doesn’t appear to have any inclination to believe that it does (have the right). And if it has the right, what is our part in this?
We have an idiot (Dear Leader) in the White House who has a very hard time understanding how the world works.

— No, Dear Leader, the world does not adapt itself to your simplistic utopian socialist world view of things no matter how many speeches you give. The rest of the world believes you’re an embarrassment to the United States and of course, we couldn’t agree more. The Russians and Chinese disregard you completely as does your buddy Ahmadinejad.