ISIL, Ramadi and What it Means 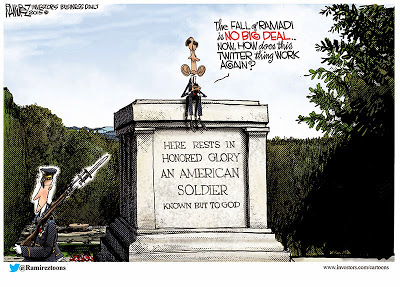 Facebook
Twitter
Pinterest
WhatsApp
We watched Ramadi fall to ISIS on prime time (and well within the 24 hour news cycle). The images of first-class American military equipment abandoned in its sheds and in military bases provide demonstrative evidence of failed policies and programs by multiple governments. Iraq is not Vietnam and the analogy ends with the images of trained and equipped forces running away. But the images resonate with the American psyche all the same.
A Mother’s Thoughts
This week we saw President Obama giving a speech at the US Coast Guard Academy, stridently warning that climate change was America’s biggest military threat. Obama needs to crawl back under his rock in Chicago. He and SECSTATE Hillary R. Clinton, presidential aspirant, made sure that Iraq would stay broken. They succeeded.
While I do not think that the ISIL movement in Iraq is “our war”, we need to follow what is happening because it has much broader implications than a bunch of ‘earth boys’ running, gunning, and beheading in Iraq.

ISIL in Anbar Province/Governate is on the cusp of two threats. The most immediate is the violent breakup of Iraq as a result of fragmentation. Except for a few pockets of bypassed pro-government soldiers, the Islamic State has carved out a Sunni Arab canton in western Iraq. Fragmentation is always centrifugal. Thus in one scenario the Islamic State could make Ramadi a sub-regional power center that challenged Baghdad.

If the Islamic State does no more than consolidate control of Anbar, it will complete the de facto fragmentation of Iraq.
The Kurds already have their quasi-autonomous region. The Shiite Arabs have what is left. The one of conflict tends to focus on the northern oil fields and infrastructure, for now at least.
The second dimension of violent threat is centripetal, meaning the capture of Baghdad which constitutes the center of power of Iraq. The Islamic State shows no signs of consolidating its victory at Ramadi. Its forces are too few to build defenses. Their local commanders recognize that the best defense is a good offense, exploiting their forces’ mobility and the panic of the Iraqi government forces.
In this pursuit and exploitation phase, ISIL must take Habbaniyah, which remains in Iraqi government (Shiite) hands. If they bypass it and press the pursuit they might reach the outskirts of Baghdad if they can run the Iraqi government forces to ground before Shiite militias gather strength. ISIL will attack and neutralize, if not capture, Baghdad as part of the long range game plan. Otherwise the Islamic State would leave a Shiite rival power center intact. That creates a long term problem for them that they can remedy. The Islamic State does not recognize an entity known as Iraq.

Iran is watching ISIL very closely. Should Baghdad fall, it would be an opportunity for the Republican Guard to come screaming out of the Iranian highlands and seize the city (on behalf of the displaced Shiite administration). Should that happen, don’t hold your breath waiting for the Iranians to relinquish the city as readily as the United States did. Baghdad will become a satrap of Iran. I say Baghdad because Iraq really only exists on old maps in terms of national boundary.

The country is partitioned based on ethnicity and faith.

The lesson to the United States is an old one, that we forgot. “Never fight a land war in Asia.”


But…at this point, what difference does it make? – Presidential Aspirant, and architect of Obama’s failed foreign policy, Hillary Clinton