Is a Govt. Job in Alvin Greene’s Future? 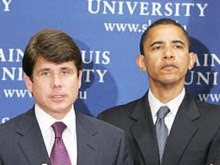 This is (another) summary of Alvin Greene’s miraculous win.

The Democratic Party is unhappy about their guy, Greene, winning the race. What do the Democrats seem to be doing these days when somebody needs to drop out of a political race? Many say, they handle it the Chicago Way – they bribe them with a government job.

Though the matter of an obama administration bribe of Congressman Joe Sestak to drop out of his US Senate race remains in question, it seems as though the Democratic Party may have put a spike in the story.


Spiked Story notwithstanding, the Chicago Way calls for a bribe — either cash that the hard core unemployable Greene needs even though he has a very low overhead – no car, lives with parents — or a government job.

Blog commenters should consider which government job Greene would be best suited for and then speak up and let us know what you think. I personally believe that he should be (at the very least) a Czar. Perhaps Green Jobs Czar, vacated by Communist activist Van Jones or maybe a completely new commissar type job overseeing Arizona – Arizona Czar!
Frankly, the State of Arizona has been handing the obama administration some headaches recently with their uppity stance toward restricting illegal aliens from entering the state, open carry firearms legislation, etc. They need a czar to oversee federal programs in that state and who better than party faithful, Alvin Greene.
All ALVIN GREEN has to do is to drop out of the race and claim that there was no quid pro quo for his czar job and the mainstream media will believe him.