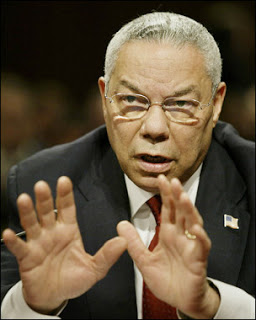 Facebook
Twitter
Pinterest
WhatsApp
Former Secretary of State Colin Powell says illegal immigrants do essential work in the U.S. and he has firsthand knowledge of that — because they fix his house. (LINK) General Powell is one of those rare birds that calls himself an “Obama Republican”. (huh?) Isn’t that a bit like characterizing yourself as a carnivorous vegetarian? Powell, a left-of-center Republican, urged the Republican Party to support immigration generally because it is “what’s keeping this country’s lifeblood moving forward.”

General Powell, Republicans and the Tea Party isn’t anti-immigration. There are many immigrants swelling the numbers of the Tea Party. They are opposed to ILLEGAL immigration. They are in favor of CLOSING THE BORDERS to illegal immigrants, and that is what the fuss is all about. With all respect, you need to get outside the beltway and mingle with the common people for just a moment to appreciate what the point is and what it isn’t.

In an interview with NBC’s “Meet the Press,” Powell said a path to legal status should be offered to illegal immigrants because they “are doing things we need done in this country.” He added: “They’re all over my house, doing things whenever I call for repairs, and I’m sure you’ve seen them at your house. We’ve got to find a way to bring these people out of the darkness and give them some kind of status.”

The last time I looked at the statutes, that was a CRIME. And it’s also a moral wrong to hire people you know are here illegally and thereby to deny work to US Citizens.
According to the Fox News article (link above), Powell also said “fringe” elements on the right are taking a low road when they label Obama a foreign-born Muslim. General, please have your friend release all of his records to set the record straight once and for all.