On September 28, 1066, claiming his right to the English throne, William, Duke of Normandy, invaded England at Pevensey on Britain’s southeast coast. His subsequent defeat of King Harold II at the Battle of Hastings marked the beginning of a new era in British history.

William was the illegitimate son of Robert I, Duke of Normandy, by his concubine Arlette, a tanner’s daughter from the town of Falaise. The Duke, who had no other sons, designated William his heir, and with his death in 1035 William became Duke of Normandy at age seven.

Rebellions were epidemic during the early years of his reign, and on several occasions, the young duke narrowly escaped death. Many of his advisers did not. By the time he was 20, William had become an able ruler and was backed by King Henry I of France. Henry later turned against him, but William survived the opposition and in 1063 expanded the borders of his duchy into the region of Maine.

In 1051, William is believed to have visited England and met with his cousin Edward the Confessor, the childless English king. According to Norman historians, Edward promised to make William his heir. On his deathbed, however, Edward granted the kingdom to Harold Godwinson, head of the leading noble family in England and more powerful than the king himself.

In January 1066, King Edward died, and Harold Godwinson was

proclaimed King Harold II. William immediately disputed his claim. Pope Alexander II recognized William’s claim, issued a Papal Bull to that effect, and gave William his (Gonfalon – right) flag to carry into battle. In effect, it threatened ex-communication to all who fought against him.

In addition, King Harald III Hardraade of Norway had designs on England, as did Tostig, brother of Harold. King Harold rallied his forces for an expected invasion by William, but Tostig launched a series of raids instead, forcing the king to leave the English Channel unprotected. In September, Tostig joined forces with King Harald III and invaded England from Scotland. On September 25, Harold met them at Stamford Bridge and defeated and killed them both. Three days later, William landed in England at Pevensey. 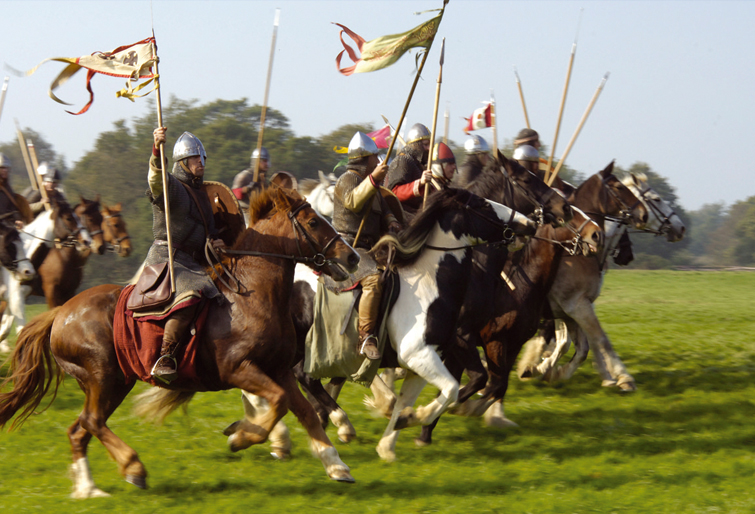 With approximately 7,000 troops and cavalry, William seized Pevensey and marched to Hastings, where he paused to organize his forces. On October 13, Harold arrived near Hastings with his army, and the next day William led his forces out to give battle. At the end of a bloody, all-day battle, King Harold II was killed—shot in the eye with an arrow, according to legend—and his forces were defeated.

William then marched on London and received the city’s submission. On Christmas Day, 1066, William the Conqueror was crowned the first Norman king of England, in Westminster Abbey, and the Anglo-Saxon phase of English history came to an end. French became the language of the king’s court and gradually blended with the Anglo-Saxon tongue to give birth to modern English. William I proved an effective king of England, and the “Domesday Book,” a great census of the lands and people of England, was among his notable achievements. Upon the death of William I in 1087, his son, William Rufus, became William II, the second Norman king of England.