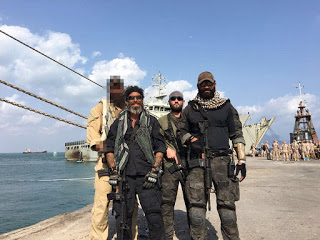 Facebook
Twitter
Pinterest
WhatsApp
The nature of warfare is changing, and some of this has to do with a lot of highly trained US Servicemen who are selling their skills to unscrupulous potentates. The scenario isn’t new. During the middle ages, English longbowmen, Genoese crossbowmen, Swiss pikemen, etc. did much the same thing – and the nature of warfare changed then too.
A number of middle aged men with skills have approached me over time, asking whether or not they should get into the trade, and my advice is always, “no”.  So this cautionary note is sort of a letter in a bottle to all of those people as well as something to blog about.
A friend of mine (L. C.) shared the story of a US Navy SEAL reservist Daniel Corbett, who has been held in prison in Serbia for eight months while under investigation for possession of an illegal handgun. The story made news from the outset because local outlets and various boutique US News sources found it to be ‘sexy and salacious’. (The corrupt, elite, mainstream media would have reported it if Stormy Daniels had been involved, but she wasn’t.)
In July, his criminal lawyer was gunned down in Belgrade in a gangland-style hit that remains unsolved. It is not known if the lawyer’s killing is related to Corbett’s case.
Corbett, who goes by the nickname “Dirty,” had combat deployments in Iraq and Afghanistan, according to three sources familiar with his military record. He first served with SEAL Team 5 from 2004–2007, and with Naval Special Warfare Development Group or DEVGRU from 2008-2011. From then until 2016, he was assigned to Naval Reserve SEAL Team 17 (drilling reservist) while he pursued his civilian career in search of whore’s gold.
In 2016, Corbett also worked in Yemen for several months for Spear Operations Group. Spear Operations Group (a US based company) was funded by the United Arab Emirates to assassinate Islamist political leaders and activist clerics. (more HERE)
Abraham Golan, who runs Spear, had traveled to Serbia with Corbett in early 2018, according to Serbian news reports.
Corbett’s first lawyer, Dragoslav “Misa” Ognjanovic, insisted in April 2018 that the firearm Corbett was accused of possessing did not function at the time. BUT its serial numbers had been removed and that’s a separate crime. In June, Serbian prosecutors announced they had indicted Corbett and three Serbian citizens on weapons charges that carried up to 12 years in prison. But on July 24, a court in Belgrade ruled that the indictment could not go forward unless it was rewritten to include more forensic information about the firearm.
Four days later, Ognjanovic, the lawyer, was shot down in front of his apartment building. (sic transit gloria mundi) The lawyer was essentially a mob lawyer, so there were other motives to kill him beyond his representation of Dirty Corbett.
As of this date, Corbett languishes in the Belgrade Central Prison, and I’m not suggesting that he doesn’t belong there.
And who knows how long Dirty Corbett will be there? He is said to be cursing his bad luck – but “the fault, dear Brutus is not in our stars but in ourselves”.
Dirty Corbett picked a bad group to attach his future to. Spear Operations Group, incorporated in Delaware and founded by Abraham Golan, (Hungarian Israeli security contractor living near Pittsburgh) is a loud mouth. Which means that when he sang to various news outlets about the assassinations that he and friends committed, it doomed Dirty.