I can’t explain it

Facebook
Twitter
Pinterest
WhatsApp
The French (historically) loved to put knives on revolvers. This is the Lefaucheux-type hybrid revolver, manufactured in France or Belgium c.~1860′s – no serial number.  Simply can’t explain why you’d want to mount what is essentially a pocket knife under a revolver in that period.

7mm pinfire six-round cylinder, double action with a 7.5cm folding blade attachment, ivory grip.
And true to its nation of origin, the weapon has a great deal of style.
During the same time period, the Baby LeMat was being produced by the Confederate States of America Navy – roughly the same size as the Lefaucheux. 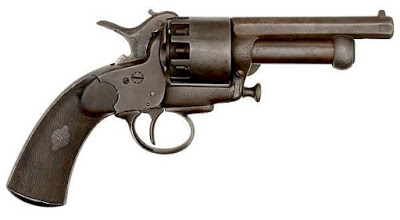 It was the smaller cousin of the LeMat cavalry pistol, nine shots in the cylinder, chambered for .32 caliber (rather than the standard .42) and the central barrel is .41 caliber instead of .63 (and in this specific pistol, the central barrel is rifled, where they are normally smoothbore for a shotgun charge).
They weren’t as elegant from a bells-and-whistles point of view as their French counterparts, but had much more firepower and didn’t need a knife to get its point across.