How do you deal with addiction? 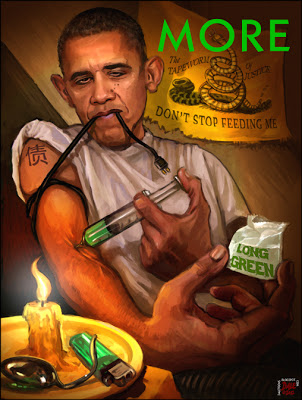 Facebook
Twitter
Pinterest
WhatsApp
Addicts can’t stop on their own. That’s the definition of addiction. It’s not manageable in any real sense of the word. It applies to people (and institutions) who have lost the ability to put the brakes on the use of illegal narcotics, drugs, food, gambling, sex — and to the government’s inability to stop borrowing and spending.

At the end of 2011, America, like much of the rest of the Western world, has dug deeper into a cocoon of denial. Tens of millions of Americans remain unaware that this nation is broke — broker than any nation has ever been. A few days before Christmas, we sailed across the psychological Rubicon and joined the club of nations whose government debt now exceeds their total GDP. It barely raised a murmur — and those who took the trouble to address the issue noted complacently that our 100 percent debt-to-GDP ratio is a mere two-thirds of Greece’s. That’s true, but at a certain point per capita comparisons are less relevant than the sheer hard dollar sums: Greece owes a few rinky-dink billions; America owes more money than anyone has ever owed anybody ever.

50% of this country works hard and produces. The other 50% are what Ayn Rand called “looters”– these are people who basically believe the idea that their “economic self-interest” means voting yourself a share of your neighbor’s earnings. The easiest way to reference this is the “Occupy Wall Street” mentality.

Not only does the left “aim low”, their fundamental economic assumption is that the only way to get wealth is to steal it from someone else because they cannot imagine how to create it. The looter simply cannot imagine running out of other peoples’ money. For them, “hope and change” means finding newer, more improved ways of stealing it.
So, how do you deal with addiction?