About 900 US soldiers were killed in a single day. That’s three times the number killed at Little Bighorn in 1876. At the time it represented half of the standing US Army (the whole army).

The Shawnee and Miami warriors, led by Little Turtle, Tecumseh, and others, retreated northward, drawing St Clair’s American army farther and farther from its Ohio river base of supply and communications, deeper into the forest.

When they finally sprang their ambush, they fought with the same quality of rifles the American Army had and employed better battlefield tactics and discipline. 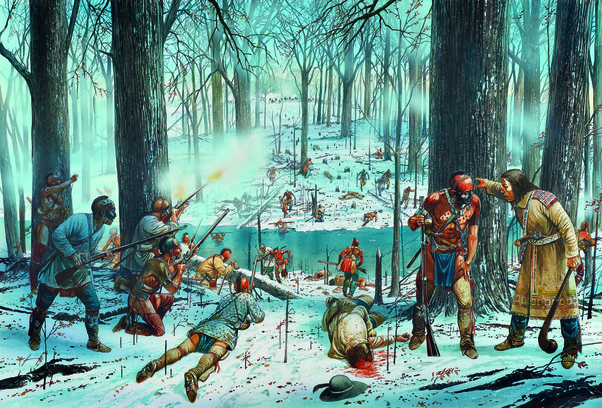 At  Gettysburg or Antietam the number of killed and wounded were staggering. At the same time, when those battles ended, the great majority of soldiers were unscathed. At the end of this day, St. Clair was fleeing with a few dozen fugitives while almost his whole army lay dead in the snow.

It was the greatest defeat in numerical terms by any Indian force, and in proportional terms the greatest blow dealt to US arms ever, by any enemy.

That same confederation was defeated decisively in turn at the Battle of Fallen Timbers.

In 1803, some London merchants and secretaries of Lloyds founded Lloyd’s Patriotic Fund, which incidentally still exists today. It was to be capitalized by a public subscription which raised £100,000 (about £5 million today) in one month. A committee oversaw the fund, which was completely autonomous and independent of Lloyds. It was to give grants to wounded Naval members and to the dependents of those killed at sea. But also to give a prize to those who went far beyond the call of duty and distinguished themselves with great courage and deeds at sea. This award was given in the form of swords, vases, and silver plates together with a certificate.

These were issued according to rank, and not only Navy officers could receive this award, but also Royal Marines and Merchant officers, as well as Privateers. 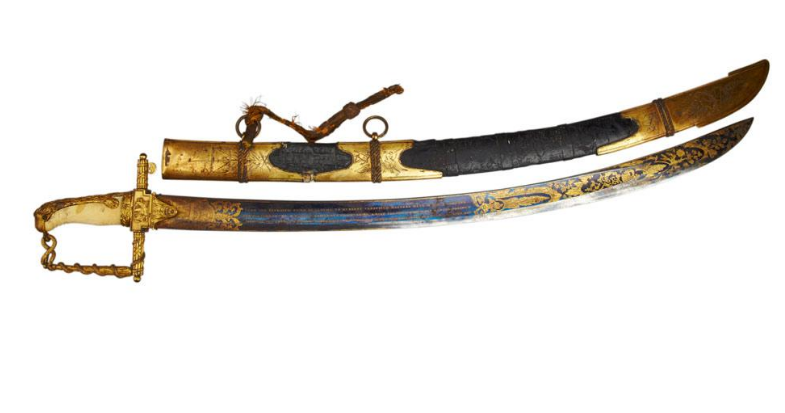 Midshipmen and Royal Marine Lieutenants received a sword worth £30 (about £1,500 today).

Money was also given for the education of children (a kind of scholarship) who, because of their status, would not have been able to attend a school or a naval academy. The Fund also supported the Royal Naval Asylum and the Greenwich Hospital near 1805. Between 1805-1812, money was also given to French prisoners of war to improve their conditions. Till today, some tasks have changed and been added, and to this day, the Fund supports armed forces charities in Britain.

What would have happened if the Germans had been able to stop the allies on the beaches at Normandy – if Von Rundstedt had released the armor earlier and if the Luftwaffe showed up? If the U-Boats had been present in large numbers?

This sort of speculation can lead to endless discussion by armchair field marshals. Which is why I bring it up here.

We know that if Overlord failed, then Operation Dragoon – the amphibious landing in Southern France would have been canceled.

Stalin’s personal archives reveal that if the landings failed, the Soviet Army would have halted on the Vistula River and would have taken up defensive positions. They knew that they didn’t have the capacity to defeat Germany on their own.

By halting at the Vistula and taking the Balkans, Germany would have been cut off from her major natural resources and German war production would grind to a halt. That being the case, Stalain would have made a separate peace with Germany since their capacity to inflict harm on the Soviet Union would have ended.

The Western Allies planned to use their nuclear stockpile against Germany (likely using B-29’s to deliver them) since that had been the plan since September 1942. Sixty German cities were earmarked for 200 nuclear warheads.

Whether or not this would have happened would most likely have depended on public opinion. By 1944, the Western Allies were becoming war-weary. With the Soviet Union dropping out of the war, would the British and Americans have sued for peace with Germany, leaving Hitler in place?

(h/t Claudio) ROME — An Italy-based defense firm that has supplied small drones to the country’s special forces was quietly and illegally purchased by Chinese state companies, Italian investigators have alleged.

Alpi Aviation produces the Strix UAV at its facility in Pordenone, northern Italy. The Italian Air Force has used the UAV in Afghanistan. It weighs 10 kilograms, has a 3-meter wingspan, and can relay video and infrared imagery in real-time. It takes 8 minutes to set up, and then it can be launched by catapult. It’s equipped with a parachute for landing.

Working their way through the tiers of ownership, police said they discovered the real owners of Alpi Aviation were “two important government-owned companies in the People’s Republic of China.”

The statement said the sale violated Italy’s so-called Golden Power law, under which defense firms, as well as strategic companies in critical sectors like energy and telecommunications, can only be sold outside Italy with specific permission from the government.

Alpi Aviation was listed by Italy’s Defence Ministry as one of its suppliers, and thus it was covered by the law, said Col. Stefano Commentucci of Italy’s tax police.

A police statement said the firm failed to notify the Italian government of the 2018 change in ownership, a transaction it described as “opaque” and designed to conceal the new non-Italian ownership.

The takeover was only communicated to the Defence Ministry two years later after inquiries were made by ministry officials, the statement added.