Hillary Clinton – Long in the Tooth? 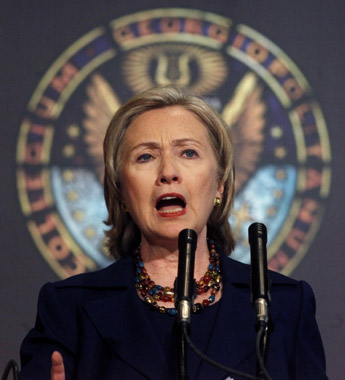 Before the women rise up and condemn me for taking a shot at Hillary, I want to say that I have personally decried other “old lizards” such as John Mertha (D-PA), Vice President Joe (Slow Joe) Biden, Robert (Grand Cyclops) Byrd (D-WV), etc. who are men.

Hillary Clinton simply is not an attractive woman, but am I the only one who has seen her drift down hill in both influence, lucidity and appearance since she took up the Secretary of State’s mantle? In the photo above, she’s putting her foot in her mouth again – this time in Brazil. I wonder if Bill would consider taking over for her? He’d do a better job.