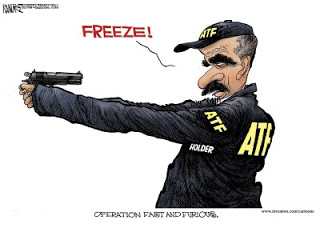 Sinister lies and dark motives underpin the US Justice Department’s OPERATION GUNRUNNER.
Why did the US Government (in effect) sell at least 2,000 firearms to the Sinaloa Federation Narcotics Cartel in Mexico? Why did they do the same thing in Honduras?
To find the answer, we need to look at what the government claimed – “90% of the firearms seized in Mexico came from US gun dealers.” The Ninety Percent Lie. The truth of the matter is that, “Of the 100,000 weapons recovered by Mexican authorities, only 18,000 were determined to have been manufactured, sold, or imported from the United States, and of those 18,000, just 7,900 came from sales by licensed gun dealers.”
Because the statistics claimed by the Obama Administration in 2009 were unsupportable by any genuine data, somebody, and we don’t know precisely who, floated the idea that DOJ needed to let a lot of firearms move from US Dealers to the drug cartel(s). The operation, fronted by ATF, supported heavily by DEA and FBI needed to be funded and the Obama Administration deftly slid the funding into HR1 – The Economic Recovery and Reinvestment Act (2009), also called “Stimulus 1”.

‘For an additional amount for ‘State and Local Law Enforcement Assistance’, $40,000,000, for competitive grants to provide assistance and equipment to local law enforcement along the Southern border and in High-Intensity Drug Trafficking Areas to combat criminal narcotics activity stemming from the Southern border, of which $10,000,000 shall be transferred to ‘Bureau of Alcohol, Tobacco, Firearms and Explosives, Salaries and Expenses’ for the ATF Project Gunrunner.’ (link above)

I do understand that few in Congress actually read the $800 billion bill before they signed it, but SOMEBODY in the Obama Administration understood what the money was for. They tried to obtain the funding for Operation Gunrunner before HR 1 in HR 495, but that never made it out committee. It must have seemed a lot easier to slip it into the “Stimulus”.
There was a widespread effort on the part of the US Government to facilitate the shipment of firearms to Latin American countries (Operation Castaway to Honduras – Operation Gunrunner to Mexico) (LINK). Why?
It would seem that members of the US Government conspired to create the statistics that they presented to the public but were unsupportable for the purpose of facilitating enhanced gun control in the US.
There is really no other possible conclusion.