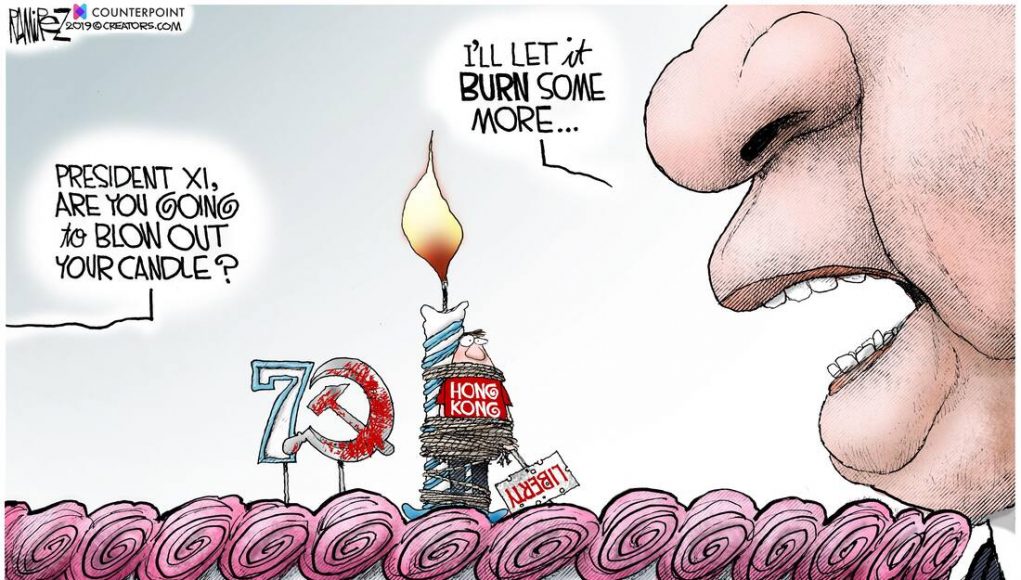 Radio Free Asia reports that the Communist Chinese Party has made its move to destroy the promised autonomy guaranteed to the people of Hong Kong under the “One Party, Two Systems Doctrine. (more here)

With the rest of the world distracted by the Chinese Plague, the Central People’s Government are now exercising so-called ‘comprehensive jurisdiction’ over every aspect of Hong Kong domestic affairs, removing all local control over the affairs of its people.

“If you want a vision of the future, imagine a boot stamping on a human face – forever.” – Orwell

On Nov. 27, 2019, U.S. President Donald Trump signed the Hong Kong Human Rights and Democracy Act into law, requiring the State Department to report annually to Congress whether Hong Kong is sufficiently autonomous from China to justify keeping the city’s distinct trading status, and whether China has eroded Hong Kong’s civil liberties and rule of law, as protected by the city’s Basic Law.

It also enables the U.S. government to freeze the assets of, and refuse visas to, officials deemed responsible for human rights violations in the city.

With the reshuffle of the cabinet, and elected Hong Kong officials replaced by communist cadre, it would seem that the city is one step closer to being completely absorbed by the People’s Republic of China amoeba.

Old China hands are watching to see if a military attack by the People’s Liberation Army on Taiwan is next. It’s doubtful that the they will attack Taiwan before the US Presidential election in November. If Joe Biden, a “bought man” and “Chinese puppet” were to be elected, it would seem to pave the way for the next domino to fall.

“Three slogans of the Party: WAR IS PEACE, FREEDOM IS SLAVERY, IGNORANCE IS STRENGTH”– Orwell

Meanwhile, in the USA

Last year, Chinese banks were also allowed for the first time to buy several financial institutions. Next year, in the absence of curbs, China will likely launch a bid for a sizeable resource company. This was last attempted in 2005, when a Chinese oil giant bid $18.5 billion to buy Unocal Corporation. Congress and the media reacted negatively and the Chinese withdrew the bid.

Wall Street has been lobbying to allow China in to make big takeovers so it can earn larger fees. They and others argue that restricting China would be unfair and foolish because American companies have been allowed to invest billions in China. But investments there are restricted to “green fields” — high-risk start-up operations or minority ownership. The fact is that Coca-Cola or General Motors or Maytag cannot take control of an existing, established Chinese rival. That’s not how Beijing made the rules that foreign companies have to adhere to if they are doing business in China.

Smithfield Foods has become the branch plant of its new proprietor — a holding company called Shuanghai International Holdings Limited, the biggest meat processor in China. But the ultimate beneficial owner is the Chinese government, and Shuanghai answers to the politics, policies and edicts of Beijing. This is the nature of “China Inc.”

The Smithfield buyout is a great loss because the company has become a huge exporter, to Japan and elsewhere, and has developed, with taxpayer assistance, systems and technologies that are best in class.

Of course, that was why it became a target and why China Inc. overpaid to get it. But the only American beneficiaries will be a handful of investors. The rest of Smithfield’s stakeholders, and the American economy, will be bruised.

The damage includes the fact that Smithfield’s technology, research and development and patents will be transferred to the Chinese parent company. Smithfield will be hollowed out and the head office will be moved to China.

Smithfield’s export initiatives will be transferred to China and exports to Japan and elsewhere will likely be done out of China — not the US. Smithfield will be scaled back to serve the US market only. Eventually, it likely will be closed and become an importer of rebranded products made in China.

The current American workforce will be capped or reduced over time as production and exports shift to low-cost China. American suppliers will face tougher, remote procurement terms from China. Prices will drop to compete with low Chinese production costs.

Lastly, Smithfield will be obliged to market Chinese products in the United States, a worrisome prospect given that country’s lack of health and safety protections.

This trajectory is predictable, and, if replicated enough times, represents a long-term disaster for the American economy.

That’s why Washington must impose new foreign ownership restrictions based on the principle of reciprocity. The rule must be that foreigners can only buy companies if Americans can make similar buyouts in their countries.