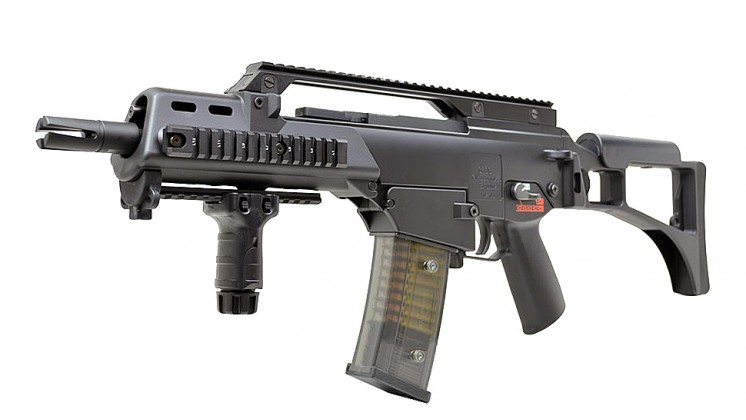 Back when I was in the law enforcement business, i carried a Heckler and Koch G-36C with a four station trigger group. The G-36C’s that I took delivery of from the factory in Germany were the very first ever sold to law enforcement, so you’re ticking back to about 2000 – two decades ago.

I realize that many of you are uncomfortable with the police carrying automatic weapons and that you feel that it militarizes the police. The problem that I was faced with was that almost every criminal that we came up against carried automatic AK-47’s or even MP-5’s, Uzis or Ingram Model 10 or 11’s (Mac 10/Mac 11). All I wanted was PARITY. You can’t seriously object to that, can you? And I got my way. We loaded out heavy. I explain this so that you understand that I had operational experience with the G-36C and that my opinion has some weight – more than somebody who never fired one.

The controversy began when shooting range officers of the German Army reported that the weapon became less accurate after it had been exposed to heat for a long time. What that meant was that after a few thousand rounds, fired at the range, without allowing the barrel to cool, the weapon’s accuracy suffered. A trained chimp could have predicted that. It’s true of every submachine gun on the planet.

Then German infantry in Afghanistan complained that they couldn’t hit the enemy with their new rifle. The media wrote stories without verifying anything and off it went.

Heckler & Koch, the manufacturer of the G 36, did additional testing and issued a statement saying that the weapon fulfilled all the specifications that the German military had required. They also took legal steps to defend their reputation and a German court issued a verdict in their favor.

The problem is that the G 36 is incredibly accurate under normal shooting conditions. However, after it has fired many thousands of rounds, it loses a lot more of its accuracy than other weapons. But even then, it is still an exceptionally accurate rifle.

I carried it in the two round burst configuration (double tap) and in combat range testing it would place the rounds between 1/2 minute of angle and 1 minute of angle separation in the 25M to 40M range. What that means is that the two rounds, fired one, right after the other, created a much more significant wound channel than one round alone would have created.  Firing two round bursts of 5.56mm. We originally used the Federal XM855 62-Grain FMJ Green Tip. Then we used the Hornady 55-grain GMX. For our purposes, the performance of both rounds was equal.

The bitches and gripes from the German Army never translated to my use of the weapon in any situation, and I was sad when I had to turn it in when I retired and moved on to other work, where I carried the M-4 – a nice weapon, but not the G-36.