From Human Torpedo to ASDV

Human torpedoes or manned torpedoes are a type of diver propulsion vehicle on which the diver rides, generally in a seated position behind a fairing. They were used as secret naval weapons in World War II. The basic concept is still in use by many navies around the world.

An Israeli entry into the secret world of the mini-sub is pictured below.

A typical manned torpedo has a propeller, hydroplanes, a vertical rudder and a control panel with controls for its front rider. It usually allows for two riders who sit facing forwards. It has navigation aids such as a compass, and nowadays modern aids such as sonar and GPS positioning and modulated ultrasound communications gear. It may have an air (or other breathing gas) supply so its riders do not have to drain their own apparatus while they are riding it. In some the riders’ seats are enclosed; in others the seats are open at the sides as in sitting astride a horse. The seat design includes room for the riders’ swim fins (if used). There are flotation tanks (typically four: left fore, right fore, left aft, right aft), which can be flooded or blown empty to adjust buoyancy and attitude.

The concept of a tiny manned submarine carrying a bomb was developed and patented by a British naval officer in 1909, but was never used during the First World War. The Italian Navy experimented with a primitive tiny sub carrying two men and a limpet mine as early as 1918 and this craft did have some success. The first truly practical human torpedo was the Italian Maiale (nicknamed the “pig” because it was difficult to steer) used in the Second World War. 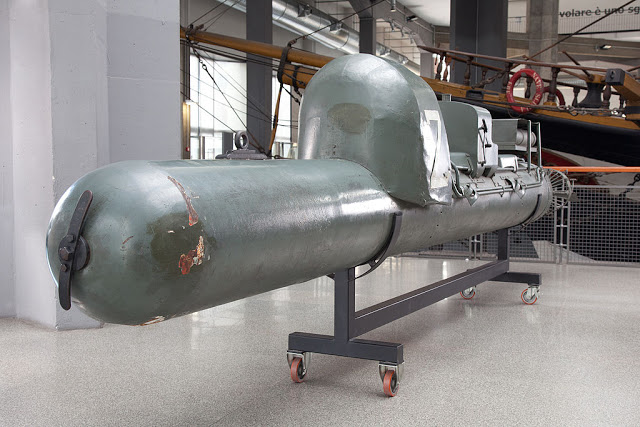 Operationally, the Maiale torpedo was carried by another vessel (usually a conventional submarine), and launched near the target. Most manned torpedo operations were at night and during the new moon to cut down the risk of being seen. Attacks in 1940 were unsuccessful but in 1941, the Italian navy (Regia Marina) successfully forced the harbor of Alexandria and damaged the two British battleships HMS Queen Elizabeth and HMS Valiant, as well as the tanker Sagona. This feat encouraged the British to develop their own torpedo “chariots”.

The last Italian model, the SSB (for Siluro San Bartolomeo, “San Bartolomeo Torpedo”) was built with a partly enclosed cockpit, a more powerful motor and larger 300 kg (660 lb) warhead (up from the earlier SLC’s 220 and 250 kg (490 and 550 lb) warheads). Three units were made but not operationally used because Italy surrendered in 1943. 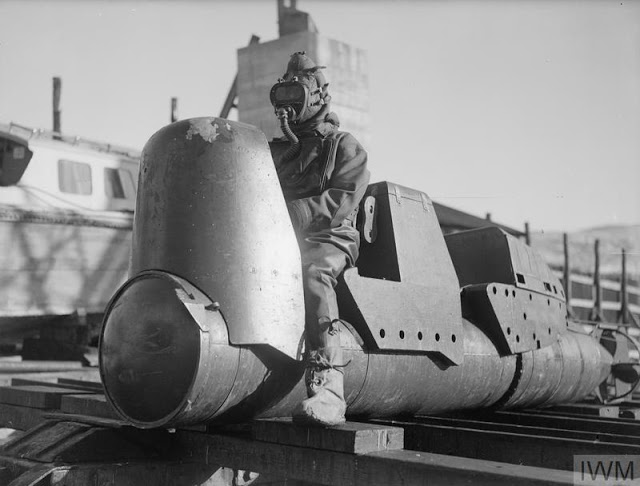 (above) The first British version of the concept was named the Chariot.

Two models were made; Mark I was 20 feet (6.1 m) long while Mark II was 30 feet (9.1 m) long, both suitable for carrying two men. Later versions were larger, starting with the original X-class submarine, a midget submarine, 51 feet (16 m) long, no longer truly a human torpedo but similar in concept. The X-Craft were capable of 6.5 knots (12.0 km/h) on the surface or 5.5 knots (10.2 km/h) submerged. They were designed to be towed to their intended area of operations by a full-size ‘mother’ submarine.

The US Navy captured Japanese manned torpedoes during the Second World War and the idea of riding a torpedo into a harbor never caught on. However, the notion of transporting combat swimmers UDT/SEALs from a mother submarine to a point of departure to the land or to deploy a mine or other stand-off weapon had some appeal.

This led to the development of not only the Mark VIII SEAL Delivery Vehicle (SDV), but to a drydock shelter (DDS) that would house the SDV until it was able to deploy.

The SEAL Delivery Vehicle (SDV) could also be hauled to the water in a trailer.

It also had a sled that it could ride behind a small surface combatant until it needed to be deployed.

As with a human torpedo, the SDV (Mk 7, Mk 8 and MK 9) was wet, which means that the duration of the mission was generally shorter than it would be in a mini-sub that had a crew in a dry compartment.

In the photo above, SEALs deploy a Mark VIII SDV from a DDS attached to the USS Cavalla.

The MK 9 SEAL Delivery Vehicle was armed with two torpedoes.

Enter the Advanced SEAL Delivery System. It’s a much larger craft, with a much larger independent range and it can carry a much larger swimmer payload. The ASDS does not need a complicated drydock shelter. It mounts directly to the hull of its mother submarine.

Most information surrounding the ASDS is classified.