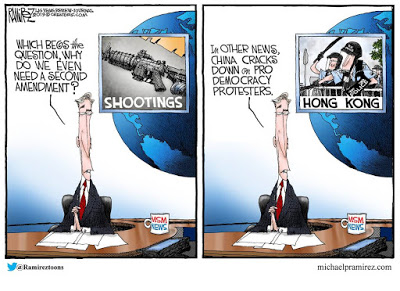 I can’t add much to the news, that is now being circulated about the current situation. I’m meeting with a shot caller from the PRC on Sunday to talk about a few issues and HK might come up. If so, it might be enlightening. If it is, and if I can share it, I will, without attribution.

The PRC has pulled some people out of retirement to advise them on handling the police situation and while it may help in the short term, it’s not even a bandaid on the underlying problem. I know some of those pensioners myself and they’re competent. The current problem has nothing to do with the USA and allegations of meddling.

It’s unusual for the PRC to have to deal with a groundswell of profound discontent in Big China. Usually the police can nip that in the bud and send the discontent to Western China to become farmers in stony soil… But this is something else and it’s been allowed to go too far. You know all that.

From Fox News reporting, the painting of Bill Clinton wearing a blue dress, hanging in Michael Epstein’s living room, came as a total shock to the Clintons. When asked whether or not it was a legitimate reaction, the Clintons replied, “Ask Mike.” 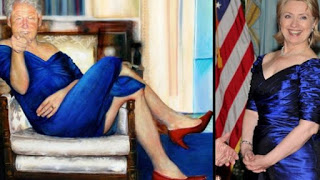 WASHINGTON, D.C.—The American state department has come up with an ingenious plan to solve China’s democratic protest problems and make our nation great again in one fell swoop.

Through some great negotiating on the part of Donald Trump, we’ve struck a deal to trade all of our country’s Communists for Hong Kong’s democratic protesters.

After the deal was made, the military began rounding up the Communists—who didn’t complain, as they’re all for an authoritarian state—and putting them in cargo planes…

It would be a useful swap for the ChiComs. They’d get a bunch of deadbeat communists who want everything free – promise of the worker’s paradise – and America would get a bunch of hard working, freedom loving people in exchange. Our fellow blogger, Mike_C made this suggestion the other day, and now maybe it could be a reality.
Imagine Bernie Sanders replacing Carrie Lam as Governor of Hong Kong, implementing his socialist vision and cheering with the crowds as the PLA goose-stepped down the street in front of his reviewing stand. Maybe Elizabeth Warren could run a re-education camp for those Hong Kong citizens who didn’t make the flight out? Beto O’Rorque could serve as the brain trust for New Hong Kong!
For those of you who don’t think that Sanders, Warren and O’Rorque couldn’t find productive labor, and who can blame you, this is the final solution. I’m sure that President Xi would be thrilled to have these die-hard communists in China.