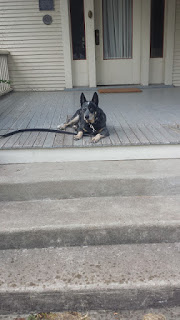 (Read More Here) It started off as a normal armed stroll to the local Pick ‘n Steal, the famous Shamrock filling station that’s founded by Irishmen and run by Nepalese.

Where’s the due Process? Where is the justice? No justice, no peace!

Blue Avenger is in heavy custody without visitation rights or outside chow… (can’t get a McRib sandwich with a file in it or even KFC chicken tenders)… “no take-out”, the County lock up says.

Hillsboro is a city in and the county seat of Hill County in Central Texas. The population was 8,456 at the 2010 census.

Fed Ex guys, Mailmen and others who deliver parcels and mail have long been targeted by K-9s. They have a particular hatred of the Blue Avenger (unofficial king of Hillsboro dogs).

Now for the BIG QUESTION: Was Blue Avenger set up?

Does Kim Jong Un have a tiny penis that causes him to compensate with a big missile? Did Barack have the British wiretap Trump Tower? Does Vlad Putin get laid more often than the average blogger does? You have your answer.

Ever since I was a kid, people who were older than I was told me, “Let me give you some free advice, kid.”

Was that advice worth anything? It turns out that in most cases, it wasn’t, unless it was something obvious like, “don’t eat yellow snow”, “don’t eat Fredd’s Aunt Sally’s spaghetti because it will chip your teeth”, “don’t pee on that electric fence over there”, “stay away from Crazy Suzy Wong, the rice paddy whore, because she has the clap” or, “sailor, don’t volunteer for anything”. They could have added, “don’t wear a postal uniform in the presence of Blue Avenger” — if he was alive back when I was young, which he wasn’t. 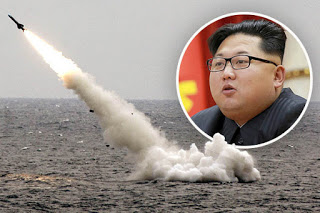 There are different approaches that the US can take with the Democratic People’s Republic of Korea (DPRK) (Norks).

The Trump Administration has chosen to break with the tradition of Barack and Bush-the-Younger and has said that there will be no payments (ransom) to North Korea and there will be no more multi-party talks that involve the USA.

The single biggest threat to war for the USA is North Korea and giving South Korea and Japan nuclear weapons and delivery systems may be one way to counter the fat little dictator’s saber rattling. Or maybe it’s time to surgically strike their nuclear production facilities, their missile production facilities and their launch sites? That’s what Japan is saying because they are tired of having Norks launch missiles into their economic exclusion zone and toward their country. 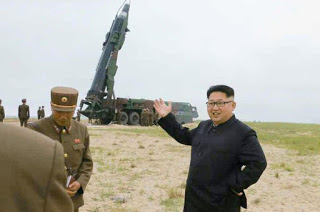 Who can blame the Japanese? Certainly not President Trump, who is not amused by China’s long suffering coddling of the only fat man in North Korea and his regime’s behavior. I realize that by shutting down exports to the Norks, China is responsible for starving people. That’s not something that any nation should take lightly, but the Norks put all production toward building missiles and nuclear weapons and have little care whether or not the people starve – or eat tree bark, which is the same thing.

The ball is in China’s court. They do NOT want the US to arm South Korea or Japan with their own in-house nuclear weapons. They do not want the US/Japan/South Korea launching military strikes against the Norks and involving THEM in a war. Honestly, when the Norks launch a nuclear tipped missile, there is just about as big of a chance that it will hit the Chinese as anyone else.

Chinese Options: Try to starve the Norks; Regime Change (kill the fat little dictator and his friends); Invade North Korea and put things straight; Do nothing and watch Japan and South Korea gratefully accept nuclear weapons and missiles from the USA.


There is no Free Lunch.