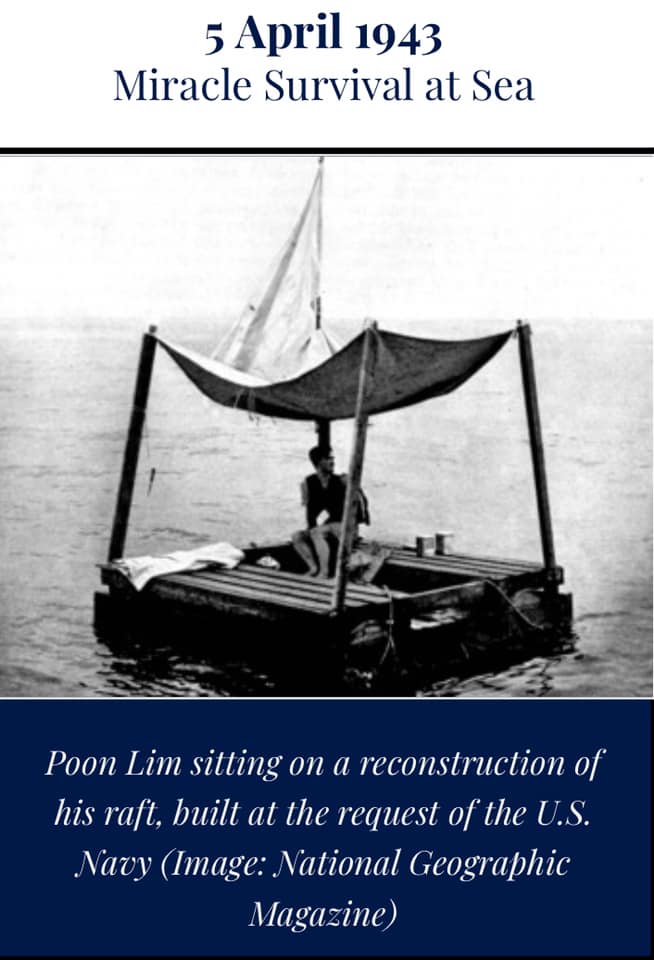 Chinese steward Poon Lim was found off the coast of Brazil by a Brazilian fisherman family after being adrift for 133 days.

Lim found himself in the ocean after the British ship SS Benlomond, where he worked as second steward, was torpedoed by a German submarine (on 23 November 1942). Lim found an eight-foot (240 cm) wooden raft with supplies. When the supplies ran low, Lin resorted to fishing, catching seabirds, and rain collection.

The Royal Navy was so impressed by his survival skills and story that they incorporated his techniques into their manuals. After the war, he wanted to emigrate to the US and, despite initial difficulty due to the Chinese immigration quota having been met, he was eventually allowed into the United States thanks to special legislation written by Democratic Senator Walter Magnuson of Washington. Poon Lim lived to the age of 72, passing away in 1991. To this day, he still holds the official record for longest time for a lone person to survive being adrift at sea in a life raft. When told this in 1943, Poon Lim responded, “I hope no one will ever have to break that record.”

A Men’s Restroom in Arizona 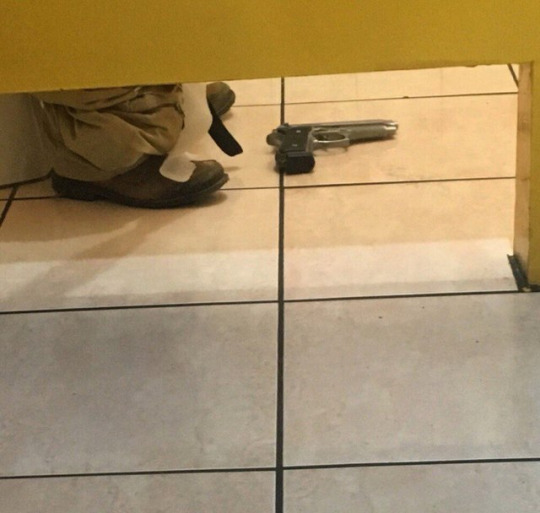 After defeating the “Optimates” (the aristocratic faction within the Roman Senate) under Pompey Magnus at the Battle of Pharsalus, Caesar traveled on to Egypt. There he secured the Ptolemaic throne for the teenage Cleopatra VII. After a romantic sojourn with the young queen, he returned to Italy to prepare for the next round of warfare against his enemies, who were reorganizing in Africa.

In the Roman Africa province (modern Tunisia), the Optimati commanders Metellus Scipio and Cato the Younger had allied with King Juba of Numida (long a personal enemy of Caesar’s), and raised a force of 12 legions. By the time Caesar landed in Africa, the Optimates has a force of 72,000 legionaries and allied Numidian light infantry; supported by a as much as 15,000 Numidian light horse and 60 African war elephants (the now extinct, smaller North African Forest species).

Caesar was met by the Optimati general Labienus, a man who had been his former chief lieutenant during the Gallic War, at Ruspina in January. There Labienus handled Caesar roughly. After two months of maneuver, the two armies faced off again here, at Thapsus. This Optimati stronghold was besieged by Caesar, with Scipio and his co-commander Afranius bringing up their superior forces to trap and destroy Caesar once-and-for-all.

Caesar had a force of 8 legions, most of soldiers veterans of his 10 year campaign to conquer Gaul and of his earlier victory at Pharsalus. Caesar’s army numbered 50,000 infantry and 5,000 horse. His men had lost no confidence after Ruspina, and in fact were embarrassed to have been so bested; and were eager to bring their foes to battle. The terrain favored Caesar’s smaller army: a narrow corridor of land constrained on one flank by the sea and on the other by a broad salt marsh. A fort occupied by several cohorts of Caesarean troops blocked the Optimati approach up this corridor from the south. Therefore Scipio detached Afranius and King Juba to hold the southern end while he attacked Caesar from the northern side. 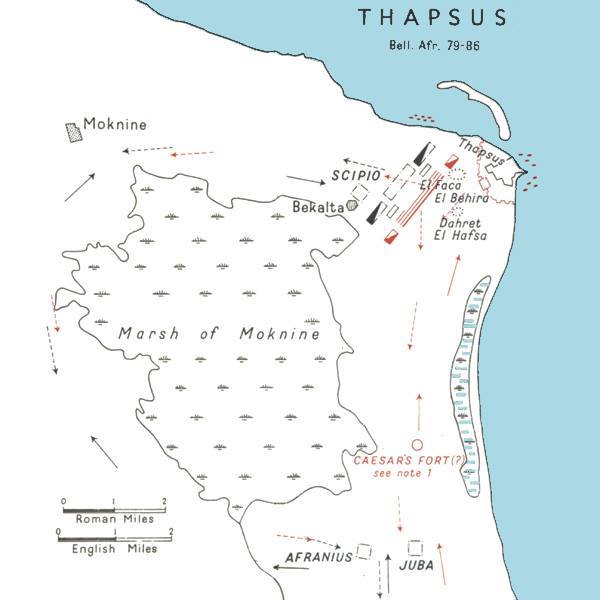 Arriving near Caesar’s defensive works at Thapsus, Scipio drew up part of his army for battle; while other cohorts began construction of a camp in his rear. Scipio placed his Numidian cavalry and light infantry on either wing of his legions; with the elephants divided on either flank, screening the front of each wing.

Observing the division of his enemy’s forces, Caesar left two legions before Thapsus to contain the garrison, and marched with the bulk of his army to within 1500 paced of Scipio’s. Caesar deployed his forces in three lines: the elite Tenth and Seventh legions were posted on the right wing, while the Eighth and veteran Ninth were placed on the left. The bulk of his legions, many of which were comprised of new recruits, were stationed in the center of his line where they could fight with their flanks full supported by the veterans.

The Fifth legion (“Alaudae”, Lark-Crested) had received special training to fight elephants. Its Cohortes were split up and stationed forward of each of the two wings, to combat the elephants. The Fifth’s cohorts were supported by archers, slingers and other light-armed troops, interspersed among the cavalry on the wings to support them against Juba’s much-feared Numidians. 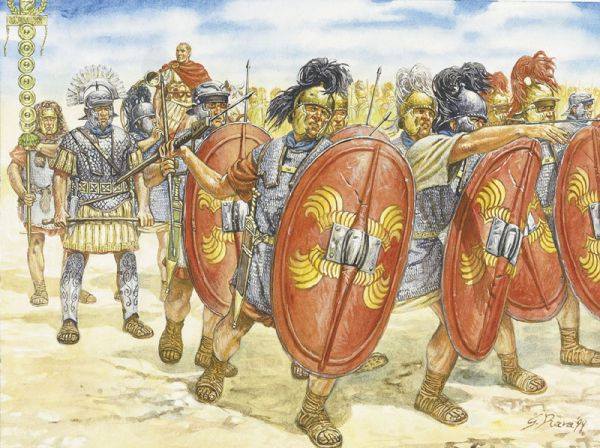 The deployment complete, Caesar went the rounds among his troops, “reminding the veterans of their gallant bearing in previous combats and raising their morale by flattering appeals. As for the recruits, he urged them to emulate the gallantry of the veterans and to make it “their ambition by gaining a victory to enjoy a fame, status and renown equal to theirs”. The troops clamored to advance upon the enemy, and impatient of orders began the advance on their own initiative; ignoring the commands of their furious centurions, who attempted to halt them. Seeing they could not be stopped, Caesar gave the signal to attack.

On Caesar’s right wing, the slingers and archers launched volleys of missiles against Scipio’s elephants. Terrified by the whizzing sound and sting of the sling’s stones and leaden bullets, the elephants panicked; and turning around, trampled under foot and scattered the supporting troops behind them. The Numidian cavalry on that wing followed suit, abandoned the field in rout. Having speedily routed the Optimati left, the legions attacked and quickly gained possession of the enemy’s incomplete camp, driving off the troops working on the ramparts.

On the Caesarean left wing the battle against the elephant screen came to close quarters. One soldier of the Fifth Legion won distinction by rushing to the aid of a comrade who was being crushed to death by an enraged elephant who was kneeling upon the fallen legionary while trumpeting loudly. When the beast observed the second legionary coming towards it with weapon raised to strike, the elephant abandoned the corpse and encircled the soldier with its trunk, lifting him up in the air. His sword arm free, “the soldier hewed with his sword again and again at the encircling trunk with all the strength he could muster. The resulting pain caused the elephant to drop the soldier, wheel round, and with shrill trumpeting retreated with all speed to rejoin its fellows”.

Both of their flanks broken, Scipio’s troops collapsed in flight. Finding their camp taken, many tried to surrender. But their passions inflamed, and still smarting from their defeat two months earlier at Ruspina, Caesar’s legionaries refused them quarter, massacring as many as 10,000 despite Caesar’s attempt to restrain their fury. One Optimati officer and Senator, Pompieus Rufus, only saved himself by rushing to Caesar’s side and surrendering to him personally.

Following this victory, Thapsus soon fell. Caesar proceeded to Utica, where Caesar’s oldest and most bitter opponent, Cato the Younger, commanded the garrison. When he learned that his troops planned to surrender to Caesar, Cato committed suicide rather than beg clemency from his hated enemy.

By July the African campaign was wrapped-up, with Caesar returning to Rome, and his remaining enemies fleeing to Spain. There, under the leadership of Labienus and the sons of Pompey, they would form the last army to stand against Caesar at Munda.

(Link) WASHINGTON — The U.S. Army is embarking on a competitive prototyping effort to acquire a new, all-terrain vehicle that can operate in the Arctic, with evaluations to take place in Alaska. In the service, take the ride if you can and in the Arctic, you will really want the ride. Alaska in the summer is buggy. In the winter, it is dark and cold. 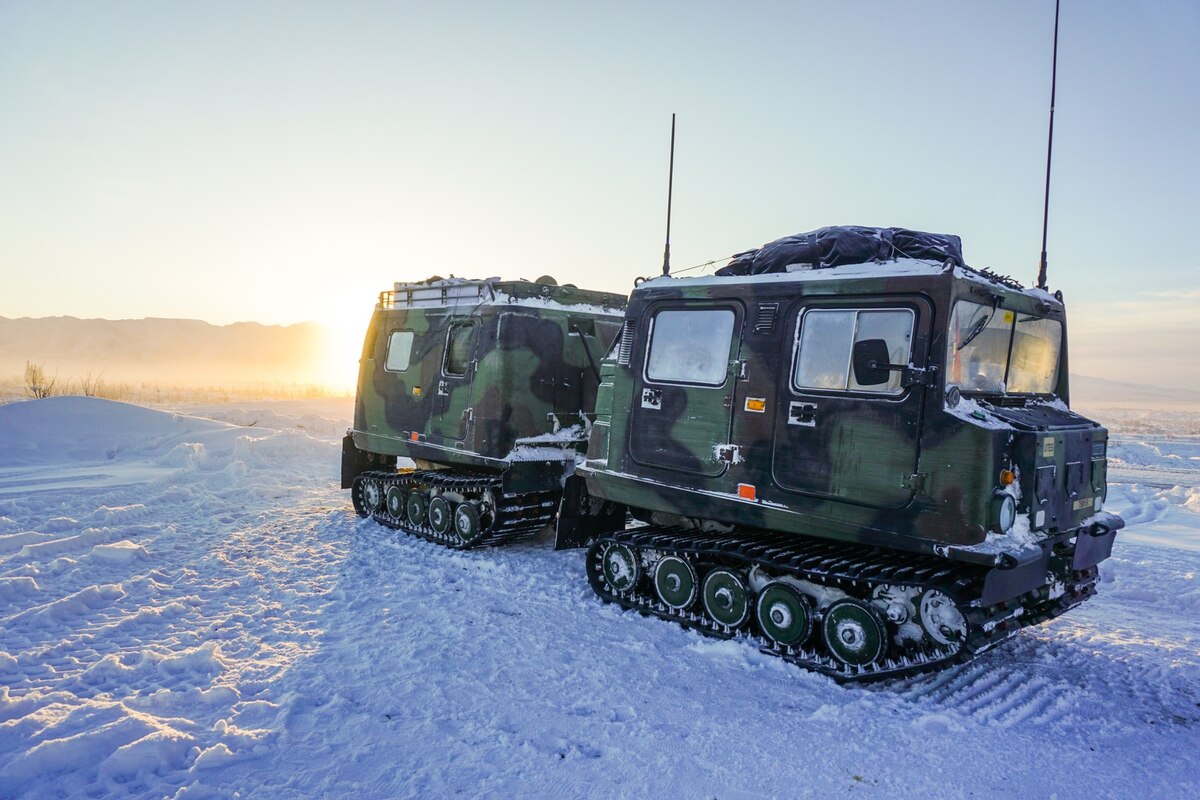 I only had one Arctic op and it was classified. I rode on a Submarine most of the time. I have no desire to repeat. Chow on the boat was good. I watched movies most of the time and stayed out of everyone’s way – so not at all like camping in the Arctic wastes.