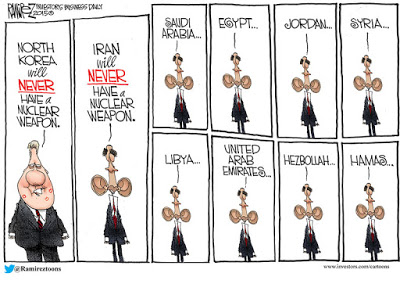 Of all the disastrous effects that the Obama Years have had on the United States, and of all the things that he’s done that will have to be repealed and done-over, the worst thing that we and the rest of the planet will have to come to terms with is the nuclear arms race that he began through (as Donald Trump puts it) “by being stupid”.

It’s very difficult to separate gross ignorance on the part of President Obama from willful damage. There are consequences to actions that he, as a malicious narcissist, would never acknowledge.
America’s allies cowered behind its nuclear shield for decades, firm in the confidence that comes with that long experience that we’d be there for them. Obama taught them that we are not there, and by extension, created the anxiety at a national survival level that has forced oil-rich potentates in the Middle East to build their own, or buy them from Pakistan or North Korea.
Every nation considers the ownership and deployment plans for nuclear weapons to be among it’s most heavily guarded secrets, but make no mistake. This is happening as you read this blog.
The Ascendence of Donald Trump, Ben Carson and Carly Fiorina
A tectonic change in American politics has arrived and you can’t stuff the rabbit back into the hat. I can’t wonder but what it heralds the end of the two-party system as we presently have it. WHAT DO YOU THINK?
Confidence in congress’s ability to do (anything) it’s job teeters between 9% and 12% approval depending on the day. Even the Democratic Party has difficulty finding a credible candidate. Bernie Sanders didn’t run for congress as a Democrat. He’s an independent that caucuses with the Democrats…and he’s ahead of Hillary Clinton in the polls.
The American people are delivering a “throw the bums out” message, and it resonates across the political spectrum. Our political class, bloated on unrestrained deficit spending, has no limits, it would seem – and no intention on doing what they were sent to Washington to do.
Enter people like Donald Trump, who isn’t a Republican even though he signed a pledge. Enter Sanders, who isn’t a Democrat even though he signed a pledge. They may not be the two last people standing after the national conventions. However, things are changing and the disastrous Obama Years are bearing bitter fruit for both sides of the aisle.
Islamification of America 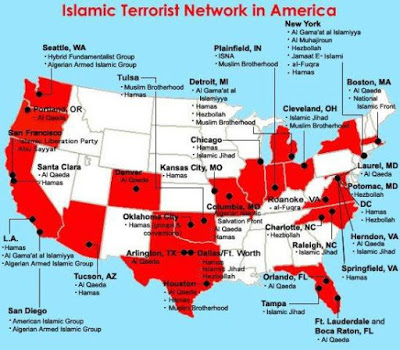 I wonder if you’d be surprised to learn that the relocation centers for Muslims coming into America coincide with the centers that Hamas and other Islamic Terror organizations have set up?
The dirty little secret that the MSM is not disclosing is that America already takes tens of thousands of Palestinian refugees into the country every year. They naturally flock to the mosques run by Hamas.
The FBI is forbidden from conducting counterterrorism operations inside of mosques since that would be “islamophobic” and intolerant. We wouldn’t want that, now, would we?
But when it comes to stats: ISIS has murdered 5 Americans so far this year. According to DOJ testimony to Congress illegal aliens have murdered 68 Americans so far in 2015.
Parting Shot 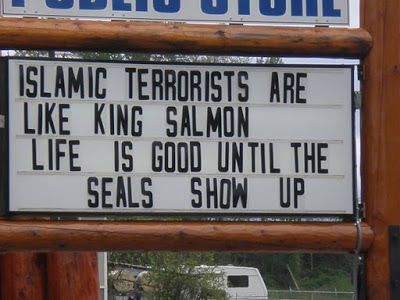