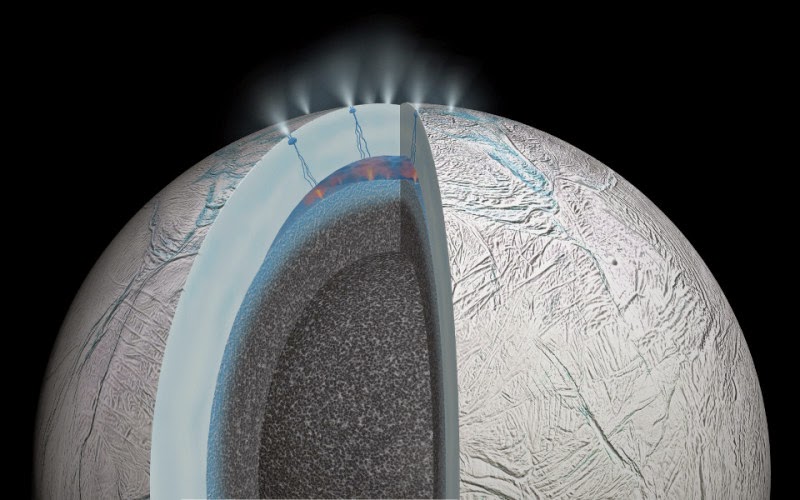 Facebook
Twitter
Pinterest
WhatsApp
(blogger) Brighid’s near rabid enthusiasm for news of the Jovian satellites caused me to springboard outward to Saturn for this bit of news from Enceladus, the moon of Saturn, which is creating its own rings by spewing water, methane and silica from the surface (not unlike water from the Old Faithful geyser).
NASA’s Cassini first revealed active geological processes on Enceladus in 2005 with evidence of an icy spray issuing from the moon’s south polar region and higher-than-expected temperatures in the icy surface there. With its powerful suite of complementary science instruments, the mission soon revealed a towering plume of water ice and vapor, salts and organic materials that issues from relatively warm fractures on the wrinkled surface. Gravity science results published in 2014 strongly suggested the presence of a 6-mile- (10-kilometer-) deep ocean beneath an ice shell about 19 to 25 miles (30 to 40 kilometers) thick.

Saturn’s moon Enceladus exhibits signs of present-day hydrothermal activity which may resemble that seen in the deep oceans on Earth. The implications of such activity on a world other than our planet open up unprecedented scientific possibilities.

“These findings add to the possibility that Enceladus, which contains a subsurface ocean and displays remarkable geologic activity, could contain environments suitable for living organisms,” said John Grunsfeld, astronaut and associate administrator of NASA’s Science Mission Directorate in Washington. “The locations in our solar system where extreme environments occur in which life might exist may bring us closer to answering the question: are we alone in the universe.”

Hydrothermal activity occurs when seawater infiltrates and reacts with a rocky crust and emerges as a heated, mineral-laden solution, a natural occurrence in Earth’s oceans. According to two science papers, the results are the first clear indications an icy moon may have similar ongoing active processes.
The first paper, published this week in the journal Nature, relates to microscopic grains of rock detected by Cassini in the Saturn system. An extensive, four-year analysis of data from the spacecraft, computer simulations and laboratory experiments led researchers to the conclusion the tiny grains most likely form when hot water containing dissolved minerals from the moon’s rocky interior travels upward, coming into contact with cooler water. Temperatures required for the interactions that produce the tiny rock grains would be at least 194 degrees Fahrenheit (90 degrees Celsius).
“It’s very exciting that we can use these tiny grains of rock, spewed into space by geysers, to tell us about conditions on — and beneath — the ocean floor of an icy moon,” said the paper’s lead author Sean Hsu, a postdoctoral researcher at the University of Colorado at Boulder.
The second paper, recently published in Geophysical Research Letters, suggests hydrothermal activity as one of two likely sources of methane in the plume of gas and ice particles that erupts from the south polar region of Enceladus. The finding is the result of extensive modeling to address why methane, as previously sampled by Cassini, is curiously abundant in the plume.
The team found that, at the high pressures expected in the moon’s ocean, icy materials called clathrates could form that imprison methane molecules within a crystal structure of water ice. Their models indicate that this process is so efficient at depleting the ocean of methane that the researchers still needed an explanation for its abundance in the plume.