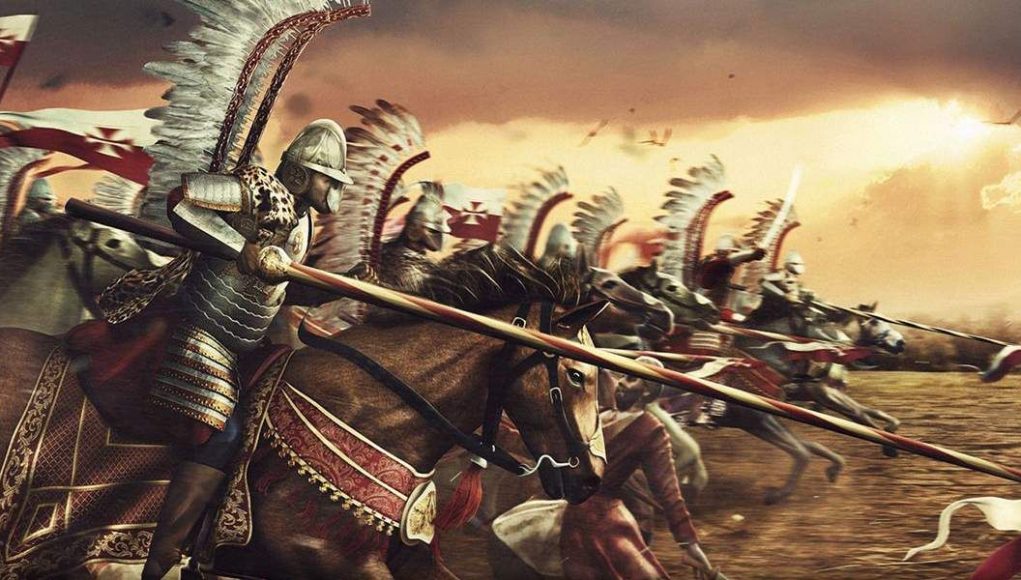 The Art of Standing Still

During the Middle Ages, armored knights were considered superior in almost every way to other soldiers for two important reasons. (1) Horses and (2) how they were used. 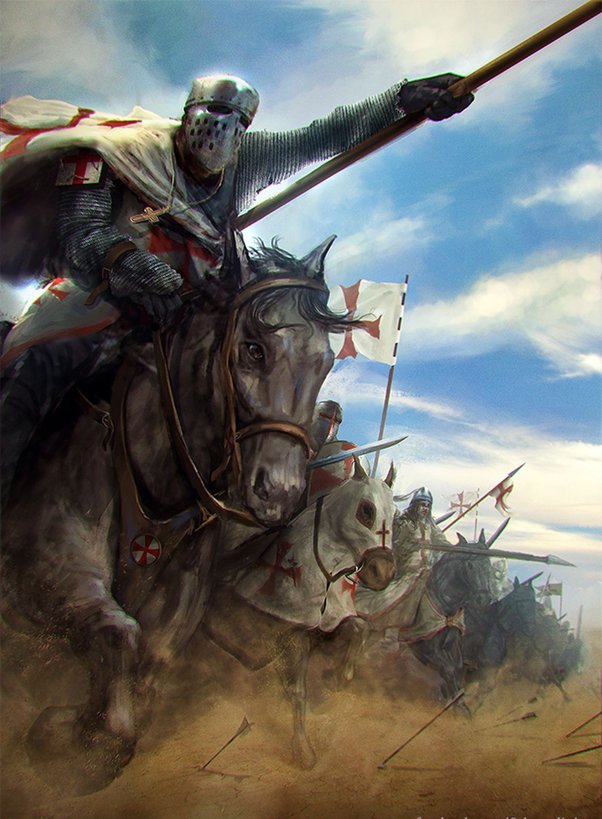 Put a couple of hundred men on horseback and send them charging towards the center of your enemy’s line. Statistically, you won. Most Kings and lords, regardless of the number of men they brought to the field, were only as strong as the training/discipline of their men. If they weren’t explicitly trained to receive a cavalry charge, they were as good as lost.

A charge by mounted and armored men is devastating, not because of the knights themselves but the fear they bring. Think about it. You have a bunch of poor likely uneducated soldiers (the fyrd) who were dragged off to a fight because of their lord’s feudal obligation they barely understand, scared out of their minds, praying to God to save their souls when suddenly it happens.

The thunder of approaching hooves and then over the horizon it appears. A solid line of faceless men clad in armor on horseback bearing down on them. Men who look so much bigger on their massive stallions and with their big sharp swords and lances. Is any god-fearing, barely trained, recruit is going to stand against THAT? 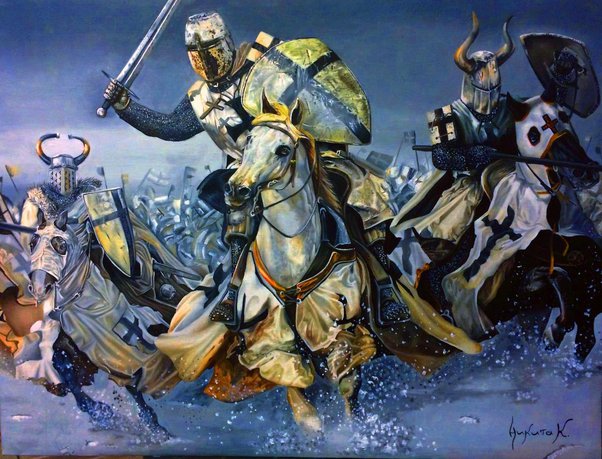 No. They break and run for their lives. And that’s where a charge succeeds. Men run away. Men get trampled by horses or each other. Maybe the knights cut them down or the men following the charge stream behind to butcher whoever’s left. That’s what a charge is. Creating chaos in the enemy’s line and exploiting it. And it happened so many times.

^Battle of Hasting, England 1066: After the Norman charge against the Saxons fails to break the center they trick the Saxons into breaking their shield wall. The Saxons pursue the fleeing Normans, who then immediately turn around, surround, and butcher them.

^Battle of Gembloux, Netherlands 1578: A mere 1200 Spanish cavalry charged an English/Dutch force 20 times their number. The ensuing panic amongst the defenders broke their formation and resulted in massive casualties for them.

^Battle of Dyrrhachium, Albania 1081: A small force of Norman cavalry completely routed a Byzantine infantry force, including a force of the legendary Varangian Guard.

^The Winged Hussars at the siege of Vienna in 1683.

The heavy horse dominated warfare for centuries, the fear of the charge and how it could break apart formations. But nothing lasts forever.

Horses aren’t dumb beasts, but rational, intelligent animals. They will not charge something that they cannot dodge or potentially hurt themselves against. And that’s where the two most critical components of a successful cavalry charge come in (not accounting for terrain, morale, weapons etc.).

The horse HAS TO KEEP MOVING. A Knight on an immobile horse isn’t a threat. He’s just a bigger target to a guy with a spear. The momentum of a charge keeps an attack moving forward, allows units in the rear to press forward, and prevents clogging of the front line. A bunch of men milling about on horses is what any archer would call a fish in a barrel.

The enemy HAS TO BREAK FORMATION. A horse is a creature of logic. It will kick and swim if it is in water. It will not try to fall from a height (say a cliff) that it can hurt itself from. And it most certainly will not charge a solid object it cannot avoid. Any warhorse, no matter how well trained, would falter at the prospect of charging a line of determined men with sharp pointy spears. A horse charging through a bunch of men running away? No problem. 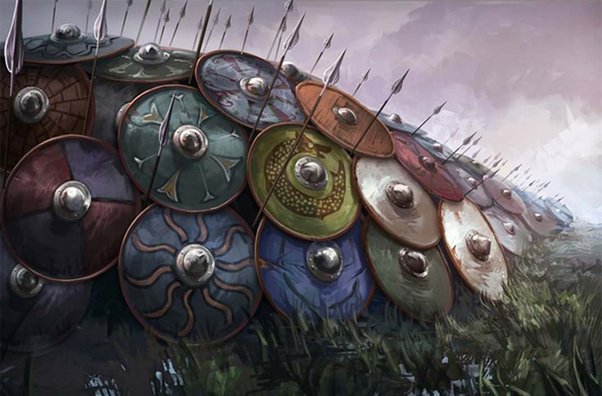 Without these two key factors, almost every cavalry charge against a solid line in every scenario fails. Men on horseback get bogged down on stalled horses. Horses won’t charge a shield wall. Men with spears decide maybe they want to poke these men on horseback who suddenly aren’t so terrifying.

That’s why as time progressed, armies increasingly instilled in their men one core concept. Don’t let fear dominate you. Men who lost their nerve broke formation. And formations that broke were slaughtered. But, keep your nerve and just take a look at history. 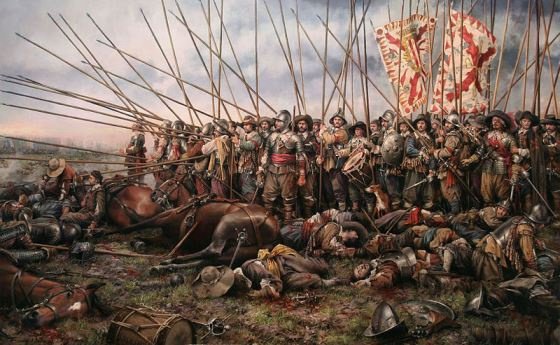 ^Battle of Nagashino, Japan 1575: 12,000 cavalry and infantrymen of the Takeda clan charged a combined force of the Oda/Tokugawa clan. Aside from pikemen, the Oda/Tokugawa also fought from behind a makeshift barricade along with a substantial number of arquebus-equipped infantry. The Takeda charge stalled and lost approximately 10,000 men before withdrawing.

^Battle of Tours, France 732: When a line of Moorish invaders attacked the Frankish army of Charles Martel, the Franks stood firm. After some time of melee fighting, the Moorish cavalry retreated when rumors of French scouts plundering their baggage train reached the front lines. A general route ensued. Rather than chase their foe, the Franks instead held firm and by the next day, it was clear victory was theirs.

^Bannockburn, Scotland 1314: English cavalry charged into Scottish pike formations. When their horses stalled in the mud and against the Scottish schiltrons (phalanx), the Knights were isolated and ground down by stubborn Scottish defenders.

^Battle of the Golden Spurs, Flanders 1302: A hasty charge by French knights fell upon a line of solid Flemish infantry and pikemen. After the charge bogged down due to bad terrain, most of the French knights were forced to dismount and were surrounded and butchered.

^Battle of Agincourt, France 1415: A massive charge of French cavalry was cut to pieces attacking a line of English longbowmen and was forced to dismount. Due to the English position, the French advantage in numbers was nullified and a mass attack stalled in cramped conditions. The charge lost momentum and eventually, the French were routed. 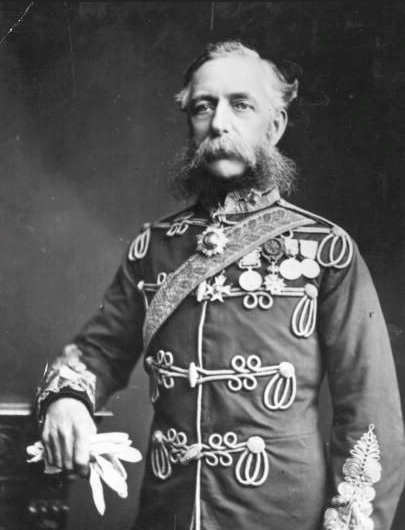 ^1855, The Crimea, British Light Brigade (the 4th and 13th Light Dragoons, the 17th Lancers, and the 8th and 11th Hussars), under the command of Major General James Brudenell, 7th Earl of Cardigan (right) against 20 battalions of entrenched Russian infantry supported by over 50 artillery pieces. These forces were deployed on both sides and at the opposite end of the valley.

A frontal assault by cavalry against fully entrenched and alerted artillery, with an excellent line of sight over a mile in length and supported on two sides by artillery batteries providing enfilading fire from elevated ground is not advised even if you are wearing cool uniforms and riding trained mounts. The results are predictable.