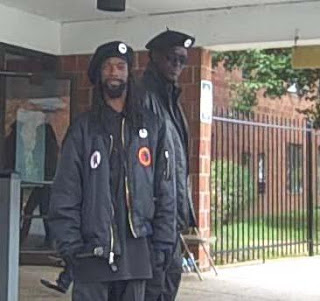 Christopher Coates (link) is one of those attorneys who worked for the civil rights/voting rights section of the US Department of Justice. He worked at DOJ forty years and moved into Voting Rights when President Clinton tapped him to do so. Of all the cases he’s handled over four decades, all but two of them involved minorities and the most notable at the moment is the now infamous New Black Panther Case.
Unlike many of his co-workers, it seems that Mr. Coates is a man of high principles, dedicated to the Rule of Law and he is testifying against DOJ, risking his job in the process. The Civil Rights Commission subpoenaed Coates and DOJ moved him to South Carolina so he’d be outside the jurisdiction of the Commission’s subpoena.
Yet ANOTHER career lawyer working currently for DOJ who also worked on the New Black Panther case, will be coming out on Friday and is “highly expected” to corroborate every single thing Chris has said about skullduggery between the White House and the leadership of the Justice Department in this matter.

Mr. Coates has informed the Commission that he will appear at the hearing on September 24th and read a statement, after which he will be available for Commissioners’ questions. It is anticipated he will provide testimony about the New Black Panther Party litigation and the equal enforcement of the nation’s civil rights laws by the Department.
The case involves members of the New Black Panther Party wearing paramilitary uniforms who positioned themselves at the entrance to a Philadelphia polling place during the 2008 election, one of them brandishing a night stick. Despite the entry of a default in its favor, the Department subsequently dismissed charges against all but one of the defendants and reduced the injunctive relief the Department had originally sought.
Congressman Frank R. Wolf (LINK) from the 10th District of Virginia has repeatedly requested that the US Department of Justice re-file the voter intimidation case, but Attorney General Eric Holder has steadfastly refused to do so. It raises the ugly issue of racial favoritism by Obama and Holder toward the Black Panthers. Van Jones, former Green Jobs Czar to Obama was and remains a close ally of the New Black Panther Party.